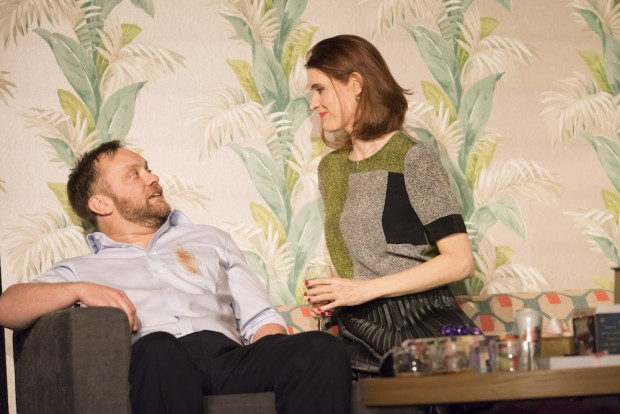 One defining characteristic of Englishness is social awkwardness, and its emotional register is embarrassment. In David Eldridge’s new play, Beginning, the first half of the 100-minute real-time two-hander is a prolonged sonata of embarrassing exchanges, some of which are among the most excruciating you are likely to see on the London stage at the moment. In their emotional truthfulness, they not only say a lot about our national character, but they also present a picture of love and loneliness in the digital age.

It’s about three in the morning on a Saturday night in the living room of a one-bedroom flat in Crouch End. Laura is a 38-year-old managing director, and it’s the tail end of her housewarming party. Amid the empty bottles, the cans of lager, half-eaten crisps and the odd dog end, stands Danny, a 42-year-old middle-management man with a ketchup stain on his shirt. He is the last guest, and is about to leave. But Laura asks him to stay. The embarrassment comes from his rather awkward attempts to grasp what is going on: as he openly admits, his radar doesn’t pick up much.

In many ways, they are an unsuitable pair. Laura is sociable singleton and middle class, a workaholic whose success is expressed through her acquisition of her new flat. She has climbed the property ladder and the work ladder, and her friends think she is great. Her Facebook page is buzzing with activity, so much so that although she is a Labour Party member and supports Corbyn, she has no time for leafletting or other activity. Yet, despite her social skills and success, she is lonely. She regrets having had an abortion in a previous long-term relationship and dreads becoming what used to be called a spinster, and is now — in her words — an “Auntie Laura” figure.

Danny is very different. He is from a solid working-class Essex background, and, since the break up of his marriage some four years ago, he lives at home with his mum. He never sees his seven-year-old daughter, who lives many miles away, and is now something of a loner. He’s tried internet dating, and has only come to this party because his work-mate Keith brought him along. He hasn’t been out much recently, and it shows. He talks too much about his mum and his nan, who calls him a Tory Boy. Clutching a can of beer as Laura holds a glass of white wine, he hops about from foot to foot, unsure of what to do.

And yet. During the party, Laura has noticed that Danny has been staring at her, and he clearly fancies her; trusting her instincts, she feels that he is gentle and honest. He has to be told that she is attracted to him, but he doesn’t want to move too fast. As Laura makes some tentative, slightly drunk, advances, Danny resists these moves, evading her attempts to connect and her need for intimacy by changing the subject, crossing the room away from her and — in one comic episode — starting to tidy up her flat for her. And yet. When two people fall for each other, there is sometimes a click as each person’s deepest needs seem to slot into the other’s. And this is exactly what Eldridge captures in this encounter.

So, as this odd couple fall in love at first sight, the playwright fills the air with Danny’s inappropriate exclamations (he says he’d run a mile rather than get involved with a woman who had self-esteem issues) and her reproving comments (she tells him not to use the word “cunt”). The themes of loneliness, and the need for family and children, are developed with a really impressive facility as this awkward couple’s initially uncomfortable interaction deepens into a closer connection. Along the way, they swap stores about the digital world: the difficulties of maintaining your Facebook timeline, meeting people online and finding love on the net.

But although this play is skillfully written, with acute psychological insight and an emotionally true understanding of how strangers can come together, what is less inspiring is that both Laura and Danny only really want to be a normal family. There’s something off-putting about this recuperation of the suburban family, something a bit sickening about the narrowness of this definition of love. A couple click: what’s their desire? To have amazing sex? To enjoy great adventures? To create new music? To change the world? No, they want to be a normal family, with a nice wedding, a nice house and a nice baby. If this is symbolic of what today’s young forty somethings really, really want, then it’s more depressing than Brexit.

Still, you can’t fault Polly Findlay’s superb production, which transfers to the West End in January. The set, by Fly Davis, is a post-party wreckage of limp streamers, soggy snacks and empties, along with decorations that seem somehow sad, indicating a lonesome Sunday to come. Justine Mitchell’s Irish-born Laura is alive to the contradictions of being female in an age where Instagram dazzles you with images of perfect lives, and her daring and outspokenness contrasts with Sam Troughton’s rather rough, ungainly Danny, a bloke whose past hurt has warped his present expectations. Thanks to some excellent acting, both characters gradually reveal more about their true selves in what is a wry and touching meditation on the shame of loneliness, one which is written with real compassion and a keen sense of the absurd. Yes, it’s so English — this is how we are.