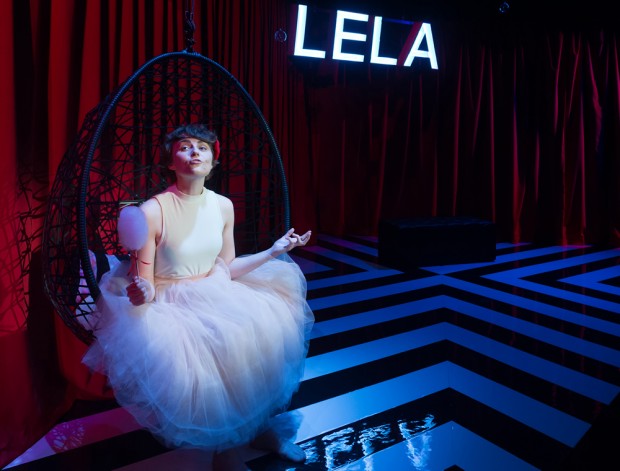 When is a monologue not a monologue? When it is interrupted by another voice, one that contradicts and argues with it. In Cordelia Lynn’s Lela & Co, her Royal Court debut which is effectively and indeed savagely staged in the claustrophobic heat of the upstairs studio space, the drama starts off as a classic monologue, with Lela telling the story of her life, starting with her birth. Then she tells of her rather brutish upbringing up to the age of about 15. Exactly what happens next is a moment of contradiction when the narrative swerves in an unexpected and frankly horrible direction.

If you want to experience the full effect of this show then stop reading. The rest of this review will be full of spoilers. If you want to experience the full effect of this show just buy a ticket. Do it now. If not, then consider this: Lela & Co starts off as a rather charming, jaunty tale of a slightly eccentric family. Jude Christian’s initially bright and energetic production, with lovely design by Ana Inés Jabares-Pita, stars the amazing Katie West in a theatrical tour de force — at first chatty, singing snatches of song and then defiant. Seductively, this seems like a lively comedy, its colours turned right up. The atmosphere is eccentric and the story’s family insights easily appreciated. Lela introduces us to her childhood, when she lived with her sisters — Em and Elle — as well as her parents and grandmother. There is a nice cranky humour; it feels like a lovely laughter-fest.

Lela’s father sees her as twitchy bird, slim and awkward. It is a “household of women with just one man”, and Lynn’s text explores the experience of a girl growing up amid sibling rivalry. In this part of the play the acting style is playful and occasionally surreal. The general feeling on designer Ana Inés Jabares-Pita’s lovely red-curtained set is like that of a circus, a place of magic tricks and silliness. There is a hanging basket seat, and lots of lollipops and candy floss. Sweet. But, Lela warns us, she will be telling “the whole truth” and when she does, things turn really ugly. So after her sister Elle marries an older man called Jay, the 15-year-old Lela is palmed off onto one of his “business associates”, and taken abroad to be married.

This is the swerve of the monologue. Lela believes that she has acted like a normal teenager; her husband swears that she was a flirtatious tease who deserves everything she got. This sudden contradiction, in which the narrative is contested, marks a sharp descent into hell. Lela is abused by her husband, then passed onto his friends as a sex slave, finally sold to anyone willing to pay. Her world contracts rapidly until it is the size of a dirty mattress. In one moment of the darkest humour, their relationship is presented satirically as if it was a business: Lela & Co.

At the same time, a ferocious conflict has broken out. Ethnic tensions in an unnamed country result in armed struggle, bombings, shootings and invasions. There is a curfew; open war explodes. War might be bad for business, but Lela’s husband has learnt to exploit the needs of soldiers, prostituting his wife and making money. As the threat of violence mounts, the stage is plunged into a complete blackout. And not just once. Suddenly the laughter of childhood clowning is just a remote memory — the present is one of pain, horror and threat. And pain is rarely so painful.

Everything feels scary; anything is possible. Sitting in the pitch black, I began to feel my skin clammy with uncertainty. What’s going on? As Lela descends into hell, I could feel her terror, and smell her desperation. For certain passages in the 90-minute show, when a single candle bleakly illuminates the small stage, I grasped at the hope suggested by this change in illumination, only for that hope to be dashed with more revelations of horror. And I really mean horror. And more blackouts. Despite a good black joke about Sarah Kane’s Blasted (the episode when eyes are sucked out), there is very little to grin about here.

West’s journey from flighty girl to victim of sexual abuse, her descent into total terror, is stunning in its precision and conviction — this is one of the most committed performances I’ve ever seen; in fact, it is one of the most powerful plays I’ve ever seen. Despite one passage of slightly didactic writing, and a refusal to back up the claim that the play is “based on a true story” by saying exactly where and when it happened, Lynn’s text works. At first, it flirts with you, then it grabs you by the throat and then it shakes you almost senseless. You begin to wish you’d never come to the theatre. Ably supported by David Mumeni, who plays all the men in Lela’s life while dressed in the shiny gold suit of a fairground entertainer, West powers through an evening that leaves you almost speechless. This is a brilliant piece of new writing.