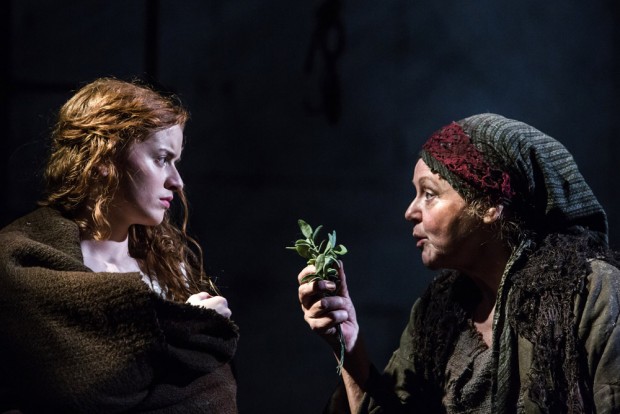 The best theatre is controversial theatre, but some controversies just make you want to weep. Out of Joint theatre company has been touring Rebecca Lenkiewicz’s Jane Wenham: The Witch of Walkern (co-produced with Watford Palace Theatre and Arcola Theatre) since September last year. All was going well until the 13 October performance at Ipswich High School for Girls was cancelled by the venue “citing concerns over the play’s language”. Max Stafford-Clark, Out of Joint’s artistic director, said: “It is deeply troubling that a play which so eloquently examines witch persecutions from a feminist perspective, and looks at the way society treated and continues to treat women, is considered inappropriate for an audience of young women. The school has also said that the inclusion of swearing is inappropriate, a policy which presumably rules out much contemporary drama or fiction for study.” Indeed. But enough about the follies of our educators, what about the play?

The story takes place in the village of Walkern, Hertfordshire, in 1712. After the execution of Eleanor Thorn for witchcraft, a rare occurrence during the start of the new Age of Enlightenment, her daughter Ann is employed by Francis Hutchinson, the aged bishop of an Irish diocese who has property in the area. With Thorn successfully hanged, a new chaplain, the Reverend Samuel Crane, who is a Protestant fundamentalist and believes in witches, seems determined to prosecute Jane Wenham, an old herbalist and wise woman, for the same crime.

In a passionate discussion about Wenham’s case, Hutchinson advocates tolerance and points out that the old woman has done nothing wrong, while the young and ambitious Crane lists the suspicious activities that he believes prove that she is a witch, including the fact that she ostensibly has a devilish familiar, in this case a chicken, with which she sleeps. To which the rationalist Hutchinson responds: “My general impression is that they do not conjoin. Wenham hugs the bird for warmth.” Great lines! Hutchinson may be lonely; he may be aged; but he listens to reason. Sharing his house is Kemi Martha, an ex-slave originally from the Caribbean, who is a voice of experience and good sense in a play where hysteria always seems about the break out.

When a terrible accident results in the death of a child, the witch hunt intensifies and Crane has Wenham arrested. The reactions of the village — which numbers not only Ann and Kemi Martha, but also the blind old woman Priddy Goodstern, Bridget Hurst, a baby farmer, Widow Higgins, who runs an alehouse, plus farmer Fergal McGuire and labourer Saul Paterson — push the tale towards its surprising and satisfying climax.

What emerges is a picture of England during the start of the Age of Reason, when the ancient folk beliefs of the villagers, especially the older and more solitary women, clash with the militant ideas of Protestant fundamentalists, who are determined to root out blasphemy and the devil’s work. So fantasies of a black Old Nick visiting women in the dark are contradicted by witchfinders, who are committed to discovering the existence of maleficium, and to prosecuting those they believe are responsible for evil. At the same time, many in the county elites and in London believe that witchcraft itself is a superstition that needs to be fought by the use of reasonableness.

In Lenkiewicz’s play, which seems to combine the best of Arthur Miller’s Crucible and Caryl Churchill’s Light Shining in Buckinghamshire, sex soaks its way through the lives of almost all involved. Whether it takes the guise of fairy fantasy, or is repressed by puritanism, whether it takes the shape of lustful passion or of grateful consolation, whether it is heterosexual or lesbian, sexual feeling is like the juice, the emotional fuel, that animates the lives of all the villagers. And the more it is frustrated, or twisted, the worse the outcome.

As you’d expect from Out of Joint, the personal politics of the piece are consistently interesting. The older women understand male sexuality in all its crudity and their derision, and fear, are only occasionally softened by mercy. Here, in this old agrarian society, the female body is the site of pain, and sometimes torture, as well as a place of potentially autonomous pleasure. But life is fiercely unfair: men might discuss religion until the cows come home, but it is the women who pay the highest price for crazy religious fantasies — a point that is relevant to us today.

So this is an outstandingly intelligent and deeply felt drama, written with great clarity, complexity, and also with an ear for some of the rhythms and cadences of early 18th-century English. The psychology of the characters is well worked out and the storytelling is bold and beautiful. It pictures women’s everyday lives and the scourge of religious fundamentalism with more than an eye on contemporary events.

Despite the heaviness of the country accents of some of the actors, Ria Parry’s production, with a design by James Button that features a gruesome gibbet, is compelling and roughly humorous. Strong performances are in evidence from Amanda Bellamy in the title role, Hannah Hutch (Ann), Judith Coke (Priddy), Rachel Sanders (Higgins/Bridget), David Acton (Hutchinson/Saul), Tim Delap (Crane) and, best of all, Cat Simmons (Kemi Martha). With Max Pappenheim’s great music, using a repeated chord that reminds me of Chris Isaak’s “Wicked Game”, this is a fascinating evening that stimulates both the heart and mind.