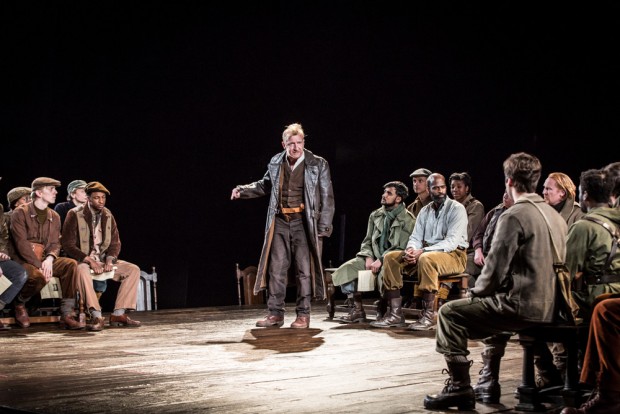 The trouble with the general election is that while everybody talks about money, nobody talks about ideas. We know the price of everything, but the value of nothing. This might seem to be a triumphant demonstration of the essential pragmatism of the nation, yet there was a time in English history when ideas mattered. And when they were passionately discussed, and bitterly fought over. I’m referring to the English Civil War of the 1640s, and its aftermath when king Charles I was beheaded, an era explored by Caryl Churchill in her 1976 docudrama.

Now revived in a sumptuous production by Lyndsey Turner, Light Shining in Buckinghamshire offers a series of snapshots of events during those turbulent years when the English Revolution threatened to turn the world upside down. As civil war destroyed law and order, the sudden absence of authority allowed a huge variety of outsiders the opportunity to make their voices heard: Levellers, Diggers and Ranters; preachers, agitators and chancers; radical soldiers, poor peasants and wandering beggars. Instead of showing the battles of the great and the good, Churchill focuses on all the people that lived, struggled and fought in the wings. As such, the play deals a body blow to the idea that the civil war was just about Cavaliers and Roundheads, and shows history from the point of view of the underdogs, for whom events were as much about class war as about bringing down the monarchy.

There are two highpoints: during the great Putney Debates of 1647, the low-class political radicals took on their masters and commanders in a discussion about voting rights and social justice, with the Levellers arguing in favour of universal manhood suffrage while army leaders such as Oliver Cromwell and Henry Ireton supported the status quo. As the theme of a revolution betrayed unwinds — and Cromwell, onetime revolutionary soldier, turns into the imperialist grandee dictator who subjugates Ireland — the play sympathises with the grassroots idealists, such as Thomas Rainborough, Edward Sexby and John Wildman.

The second highpoint is when the Diggers, led by Gerald Winstanley, occupy St George’s Hill near Weybridge with the intention of owning property in common and working together on the soil. Such scenes are a timely reminder that some traditions can be resonant, and that, however strange, the past can still speak to us today. This communitarian aspect is helped by the fact that the play’s multiracial cast is joined by members of the National Theatre’s Community Company, who fill the stage with their songs and hymns.

Since, from a Marxist perspective, the 17th century marks not only the origins of capitalist work discipline but also sexual repression, Churchill carefully gives some of her female characters a feminist voice. The concentration on the underdog results in a riot of ideas, expressed in the religious jargon of the time, and a quiet but glorious feeling of what it must have been like to live during a time of rapid social and political change: from angry clashes with sanctimonious piety to millenarian fantasies that crash into bitter disillusionment.

But beware. If you don’t already know the difference between Seekers and Shakers — or have a pretty good grasp of 17th-century history — this play is liable to go well over your head. The production’s eclectic mix of costumes suggests a long heritage, one that animated the late Tony Benn and inspires the current Billy Bragg. It is also worth pointing out that the 17th-century Freeborn Englishman (the Scots, Welsh and Irish don’t get a look in) now comes across as atrociously insular, xenophobic and obsessed with God.

Turner’s staging, beautifully designed by Es Devlin, features an enormous oak table, at which the rich gentry and churchmen feast at the start of the play, but are usurped by parliamentarian lawyers and scribes by the end (the privileged winners writing history). Later, the huge table is dismantled as the radicals seize the land. As the boards of the table are taken away, the earth is revealed. In general, the lighting and colours are reminiscent of old master paintings, but the grand scale of this hugely well-funded production sits ill at ease with the play’s lefty subject matter. From a huge cast, I liked Sargon Yelda (Rainborough), Steffan Rhodri (Sexby), Daniel Flynn (Cromwell), Leo Bill (Ireton), Joshua James and Trystan Gravelle. Alan Williams plays a variety of down and outs. Elizabeth Chan and Ann Ogbomo suffer the agonies of poverty. This drama of ideas also, occasionally, engages the emotions.