Home » Reviews » It Is Easy To Be Dead, Finborough Theatre

It Is Easy To Be Dead, Finborough Theatre 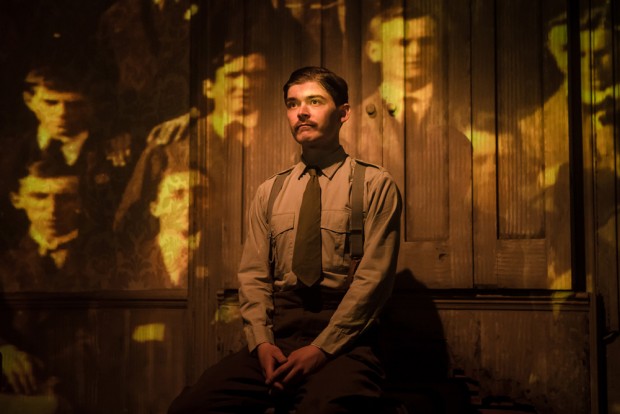 It’s very hard to find something new to say about the First World War in general, and about that conflict’s poets in particular. Stephen MacDonald’s Not About Heroes, for example, revisits familiar territory — that occupied by Wilfred Owen and Siegfried Sassoon — in a familiar way. But, as Neil McPherson’s new play makes clear, sometimes it is possible to discover something new, and to do this in a fresh new way. It Is Easy To Be Dead tells the story of Charles Hamilton Sorley, who died on the Western Front at the age of 20 in October 1915, by using his letters and his poetry. The result is a play that is both informative and entertaining.

Born in Aberdeen, Charlie was educated, like Sassoon, at Marlborough College, then spent a year in Germany in 1914. While he was there, he appreciated the country and its civilised culture, as well as falling a little in love with his landlady, a married woman, the Frau Beutin, whose husband ignores her. Pretty soon, Charlie says, “I felt I was a German, and proud to be a German.” But, when war is declared in August 1914, he seems the ugly side of German patriotism and is briefly interned as an enemy alien. When he gets back to Britain, he enlists in the Suffolk Regiment. Arriving at the Western Front the following year, he sees action, is promoted to the rank of Captain, and then shot by a sniper during the Battle of Loos. It is not known where his body lies.

All the time he spent away, Charlie wrote and wrote: numerous letters home and to friends, and many poems. The sensibility that comes across from the writings quoted by McPherson is that of a level-headed, self-contained, observant and poetic spirit who understands that it is his duty to serve his country, but doesn’t let that blind him to the fact that war is wrong. His admiration for Germany — “her Kultur is the best in the world” — doesn’t stop him from criticising the country’s militarism, and his British patriotism is laced with an appreciation of the hypocrisy of the country’s middle classes. Having been born a Scot gave him the perspective of an outsider.

His anti-war poem, “When You See Millions of the Mouthless Dead”, is full of evocative and resonant lines, and is also the source of the title of McPherson’s 90-minute play. By the time we get to the last line, “Great death has made all his for evermore”, it feels as if we’ve been on a journey, watching Charlie’s parents, William and Janet, who are shown in the months and years after they hear of his death, discussing whether to publish his poetry, as well as writing a brief biography of their son. The most dramatic moment is when William, a private Victorian academic who detests publicity, finally snaps and tells his wife that he doesn’t want to publish their son’s letters because he doesn’t “want to share my son”.

McPherson sensitively mixes the slow agony of William and Janet’s relationship, and their sad stewardship of his memory, with Charlie’s exuberant and youthful personality in letters whose words jump off the page, and whose poems that have a rare haunting quality. Max Key’s lovely production gets a boost from designers Phil Lindley and Rob Mills’s video projections, and adds an atmospherically musical aspect by including songs from Schubert and popular Edwardian tunes, excellently sung on the evening I went by Paul Curievic, who was standing in for an indisposed Hugh Benson. Alexander Knox plays Charlie with a fine mixture of rebellious certitude and eagle-eyed calmness, while Tom Marshall and Jenny Lee play his parents with conviction, and Elizabeth Rossiter accompanies the tenor on piano. This is a superbly well-judged evening that conveys both the passion of youth and the pity of war.