Home » Reviews » An Incident at the Border, Trafalgar Studios

An Incident at the Border, Trafalgar Studios 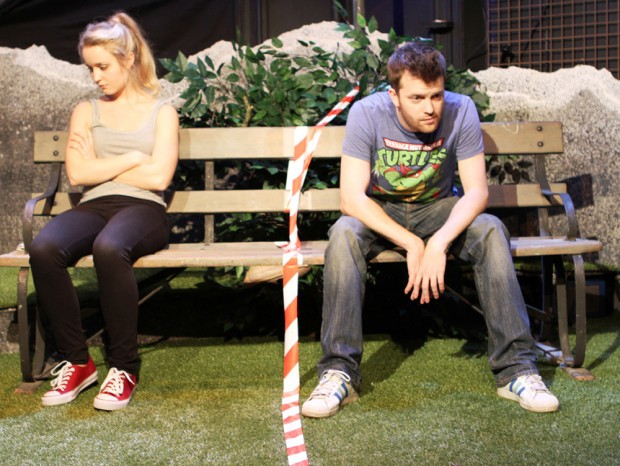 Since 2004, the Ambassador Group’s Trafalgar Studios has done sterling work in staging West End transfers for some of London’s most promising fringe talents. Kieran Lynn’s An Incident at the Border arrives in the centre of town from the Finborough Theatre, where it was seen in July. It has a good cast and, because of its sceptical attitude to the pervading aesthetics of naturalism in contemporary playwriting, lots of promise. But can it live up to expectations?

One sunny afternoon, twentysomething couple Arthur and Olivia go to a park. They feed the ducks in the pond and have a cuddle on a bench. Then, Reiver — an inexperienced border policeman — suddenly appears out of a bush and creates a border, separating the two and forbidding them from crossing this line. It is sudden, brutal and resonant of all those global political decisions which impact on the lives of ordinary people, whether in the Middle East today, or in Cold War Europe in the past. It could apply to Belfast as well as Berlin. As anyone who has queued for hours at a border control knows, the free movement of people is a myth. And arbitrary power a real threat.

The situation quickly develops into a symbolic stand-off. On one side of the frontier are Olivia and Reiver; on the other side, stranded in a newly created country, is Arthur. Arthur wants to rejoin his country, and his woman. Olivia sees no reason why she should leave her country to join him. Reiver says that he will shoot whoever violates the new border; then more troops arrive on both sides, and an international incident threatens to escalate. To pass the time, all three discuss the implications of the situation.

The new border is arbitrary, but inviolable. It has appeared suddenly, and absurdly. But the border guard, and his superiors, are sticklers for bureaucratic rules, and the border that crosses the stage becomes a powerful metaphor for senseless rules and regulations. It not only divides countries, but people; it not only divides people, but sense from nonsense; not only has it created a new nation, but it also has formed a mindset which is clearly inhuman and ridiculous. Only a real jobsworth can rejoice in its formation. And that noun describes Reiver perfectly. He just wants to do his job; he wants to be a cog in the machine. Lynn deftly outlines the psychology of such low-level bureaucrats — little people who relish the feeling of power that the enforcement of petty rules lends them. In this symbolic story, he has no lover, and his job is compensation for his loneliness. And his insignificance. Yet he polices the border with relish. And, of course, he’s just following orders. Yes, we’ve all met people like him.

As well as being a political fable, An Incident at the Border is a humorous study of male-female relationships. Andrew and Olivia are a typical couple, and their bickering is instantly recognisable. But most of the jokes rely on gender stereotypes: the woman is expressive and talkative; the man quiet and emotionally illiterate. Although each is pragmatic in turn, the idea of the strong woman who has to fix the deficiencies of her man is repeatedly reiterated. Boring.

Much of the trouble with this mercifully short 80-minute play — which was originally just a lunchtime comedy sketch during David MacLennan’s A Play, a Pie and a Pint series at Oran Mor in Glasgow — is down to the writing, which is characterless, bland and uninteresting. The humour is pretty silly, but not in a surreal or wild way. Despite a few acute lines, this is very ordinary fare. If you take its politics seriously even for five minutes, there’s not much to cheer you. If this is the voice of youth, then get me some ear plugs. The gender politics feel juvenile: help, I’m already feeling depressed.

Director Bruce Guthrie’s production is occasionally charming, sporadically witty, but — despite some flashes of insight — this is a heavy-handed show that outstays its welcome about two-thirds of the way through. Despite some good work from the actors — Phoneshop’s Tom Bennett (Arthur), Florence Hall (Olivia) and Marc Pickering as Reiver — this unsatisfying play should never have been allowed to cross the border between the fringe and the West End.