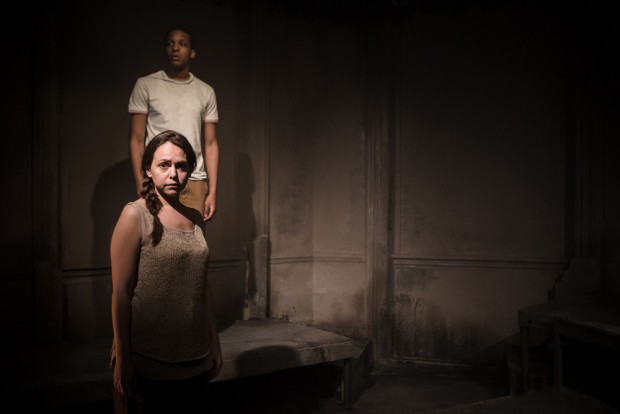 Neil McPherson has been artistic director of the tiny Finborough Theatre fringe venue since 1999, and during that time he has often joked that his programming is obsessed with violence, war and genocide (when it isn’t exploring abuse, murder and mayhem). Now he has put together his own play about atrocity, choosing a most timely subject. Opening on the exact centenary of the mass deportations that began the Armenian genocide, in which the Ottoman Turks killed 1.5 million people, I Wish To Die Singing is a docu-drama that both tells the story of the events, and indicts the Turkish state for its consistent denial of them. You’ve heard of Holocaust deniers? Well, here is a whole country full of them!

Subtitled “Voices from the Armenian genocide”, the play uses well-researched testimonies, letters, poems, reports and choruses of facts to outlines the horrific facts of the massacres and the appalling brutality of the perpetrators. McPherson points out that the word genocide was coined to describe these state-sponsored atrocities, while during the show video projections offer snapshots of the grizzly events as well as quotes from those, including Adolf Hitler, who were encouraged by the success of this horrific ethnic cleansing. The Fuhrer couldn’t have been clearer: in 1939, he said, “Who, after all, today remembers the annihilation of the Armenians?” Clearly, he felt that if the Turks could get away with it, then so could the Nazis.

Tommo Fowler’s strong and often uncomfortable production features a multiracial and inclusive cast, who all work hard, playing multiple roles. Jilly Bond acts as the narrator, providing a brief introduction to Armenian culture and history. At first it is quite jokey: Princess Diana is introduced as one-sixty-fourth Armenian; Kim Kardashian gets a name check (her father is a third-generation Armenian American). As the rest of cast sing and dance, evoking the joy of a self-confident people, Bond informs us that the Armenians were the first Christians. They have their own language, 38-letter alphabet and traditions. The phrase “I am an Armenian” is uttered with pride. By 1915, they formed a minority in Russia, and another minority in the Ottoman Empire, along with other Middle-Eastern Christians and the Greeks (Christian minorities in a Muslim state).

As the Ottomans came under military pressure during the First World War, the Armenians were accused of collaborating with the enemy. The writing was on the wall. For nationalistic Turks, the Armenians were a convenient scapegoat. Just after Easter celebrations, on 24 April 1915, the murders began. McPherson focuses on the cases of a handful of individuals, as a way of humanising the experience of a whole people. He chooses three children who survived the genocide: a seven-year-old girl (Siu-see Hung), a 11-year-old girl (Tamar Karabetyan) and a 13-year-old boy (Bevan Celestine). They tell the gruelling stories of the killings in a vivid and merciless way. There are public hangings. Some victims are beheaded, others impaled. A young girl is set on fire. An old woman drowns her own grandchildren because she can’t bear to see them starve. Then she kills herself.

All the survivors have to trek across the desert to find temporary safety; many are then adopted by Turkish families and forcibly converted to Islam. The wider international ramifications are briefly sketched out: Turkey is an ally of Germany, and some German officials who help with this ethnic cleansing go on to later have similarly murderous careers as supporters of the Nazi regime. When the US ambassador Henry Morgenthau protests at the massacres, he is rebuffed by sanctimonius Turkish officals (usually played by Tom Marshall); when Western visitors are shown the results of mass deportations, the Turkish officers defend their actions, claiming that jihad has been declared on the Armenians. As ever, religious war is used as an excuse for mass murder.

I Wish To Die Singing is simple, moving and very powerful. At the end, it denounces not only the Turkish government for its persistent denial of the Armenian genocide, but also those Jewish organisations (who insist that the Holocaust is the one and only genocide) and those governments (including our own) who follow suit. The evening ends on a justifiable note of outrage. You leave the theatre with a soul full of anger.