Home » Blog » About Our Class 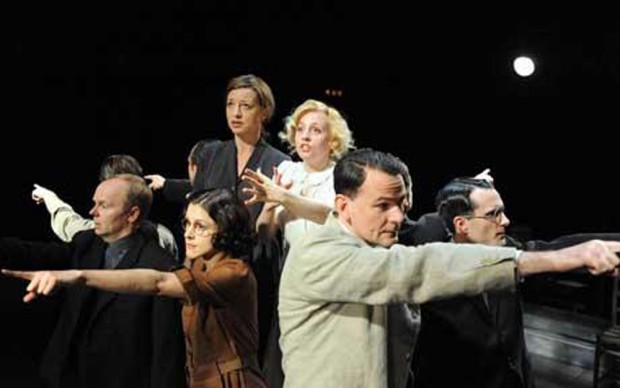 It’s not often that theatre actually teaches us anything, despite its good intentions. So I’m pleased to say that I left the National’s current production of Tadeusz Slobodzianek’s Our Class feeling wiser than I had been a little earlier in the evening. In this, I was greatly helped by the programme, especially the short article called “Victims and Perpetrators” by psychologist James Thompson. In this brief but marvellous piece, he questions — as does the play — the common assumption, shared by me, that most people would commit genocidal acts if given permission by those in power. In fact, he points out some flaws in the psychological experiments that once were taken to prove that people would unquestioningly obey authority and harm others if they were told to do so. And he also questions Hannah Arendt’s famous account of the “banality of evil”, pointing out that Arendt only attended the first part of Eichmann’s trial, and so missed the second half which showed just how extraordinarily determined he was to wipe out Europe’s Jews. He wasn’t banal at all; he was an unusually committed fanatic. Perpetrators of genocide are not ordinary people, but unusually cold or fanatical individuals. What the play, directed by Bijan Sheibani and translated by Ryan Craig, shows is that people react differently to extreme situations, and that monsters and heroes are rare. And that we are all responsible for our own actions.