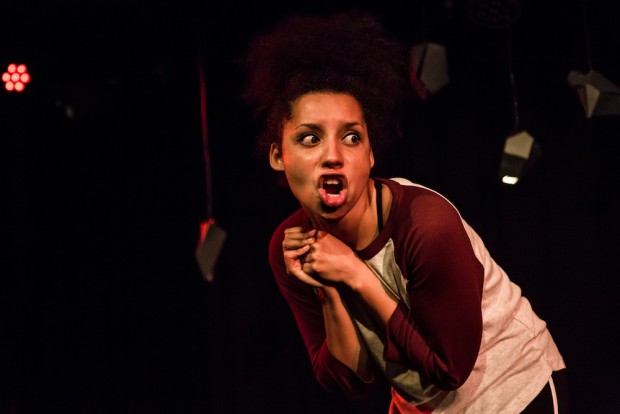 In the 2000s one of the many glories of new writing for British stages was the linguistically exciting, emotionally expressive and thematically innovative contributions from playwrights of Black, Asian and Minority Ethnic (BAME) heritage. Bam indeed! Although such new voices have been heard less frequently in recent years, these past few weeks have seen the arrival in London of three plays which not only describe different aspects of the black experience, but also use theatre forms which articulate these issues in a really wonderful way. I’m talking about Arinzé Kene’s Misty, Testament’s Black Men Walking and now Natasha Marshall’s Half Breed.

This semi-autobiographical one-woman show features 17-year-old Jaz, the only non-white teen in a West Country village. She lives with her white granny and her dream is to go to drama school in London and become an actress. Helping her with her audition practice (Hermione from Shakespeare’s The Winter’s Tale) is Brogan, her best friend. They are both outsiders, with Brogan having been brought up in foster care, and their bond is strong. Or was. Until, that is, Brogan gets involved with local boy Mitchell, a xenophobic racist who has failed to get into the military, and who tells horribly unfunny jokes about “pakis” when he’s drunk. And even when he isn’t. The unconfident Jaz smiles gamely through these humiliations, but when she decides that Mitchell is not the right guy for Brogan she conquers her fears and lashes out.

First seen in Edinburgh last year, Half Breed is one of those plays that embrace you warmly and hold you tight for all of its 60-minute duration. Marshall performs all the parts, from Jaz to Brogan to Mitchell to her granny, and then some. The plot develops rapidly and presents its coming-of-age story about growing up and leaving a narrow-minded rural backwater with appealing perception — and a dose of idealism thrown in. Jaz, who introduces herself light-heartedly by saying that “I’m the only black in the village”, is at first a bit confused by her mixed race background. She feels that she is “the epitome of mixed up, like 50/50, on the fence, lukewarm, in-between maybe”.

In fact, Jaz is indecisive not only about her personal identity, but also about whether to stay in the village or go to London. Ideally, she would like to go with Brogan, but the other teen hates the idea of the metropolis and insists on staying put. She also aspires to have a family rather than a career. As Jaz finds out more about Mitchell, and suffers the gross and appalling prejudice of the locals night after night, she gradually grows as a person and becomes increasing able to confront and face down her intimidators. By the end, she displays a visceral raw pride that is both inspiring and rather moving.

But although the story is well put-together, there are some distracting gaps in the narrative and some of the repetitive passages drain a bit of the energy out of the text. However, you can tell from the succinctness of the writing and its slightly feverish quality that Marshall is a performer of spoken-word poetry and indeed there’s an appealing vigour to the whole event. As a picture of female friendship it is emotionally strong, if a touch sentimental towards the end, and as an impression of an oppressive West of England dump, steeped in resentment and prejudice and growling with Brexit-ist fantasies, the piece works.

As directed by Miranda Cromwell, for Talawa on Ruby Spencer Pugh’s open set, Marshall performs her own play with energy and total commitment, even if some of the snaps between one character and the next are not totally clear. It’s a personal and powerful account of overcoming obstacles and the form that the playwright has chosen, a one-woman show in which she plays all of the different characters, is itself a central message of the play. And a demonstration of its embrace of humanity. At the start, Jaz says that she doesn’t know who she really is: by the end, Marshall has proved that she can play anyone, whatever their ethnic background or skin colour. She now knows who everyone is, including herself. The confused teen has grow into the single-minded and talented performer.