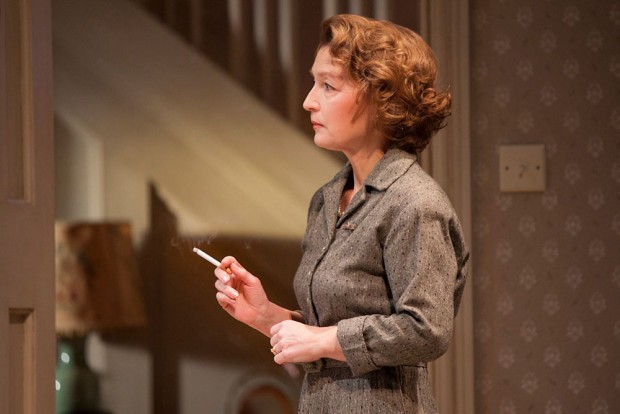 A new play by Mike Leigh is always an event. So there was a palpable excitement in the air at the Cottesloe Theatre (the smallest and most intimate of the three National Theatre auditoriums) when his latest opened tonight. With a cast that includes Lesley Manville, a regular collaborator who was also in his 2010 film Another Year, the expectation was that this would be an instant classic. Leigh doesn’t so much disappoint expectations as subvert them. Radically. At first, the main pleasure is one of recognition. Oh yes, you think, I know where we are: it’s 1957 and we are in a nice commuter belt, semi-detached home. Upper-middle-class Dorothy is the widow of Victor, who was killed in the war. She lives with their 15-year-old daughter, Victoria, and her brother Edwin, an ineffectual insurance clerk on the eve of his retirement.

In this conventional household, where people murmur the songs of Cole Porter and say “chin-chin” when raising a glass, the main ray of sunshine is the social comedy provided by its drop-in visitors, Hugh, a local doctor, and Dorothy’s old girlfriends, Gertrude and Muriel, who are both more bubbly and more glamorous than she is. But the fun of these glorious encounters, with their exaggerated mannerisms and broad humour, is soon dampened by the sense that there is something very wrong in this family.

Very wrong indeed. For Dorothy is not only still grieving for her lost husband, but she is now also worried about the loss of her daughter, Victoria, who is growing up as a sulky and aggressive teenager. As Victoria reminds her mother, she is no longer a child. Herself brought up at the start of the century, Dorothy tries to keep Victoria in order. But it doesn’t work: we watch, with the acute embarrassment of a newcomer eavesdropping on this family’s living room, how Victoria becomes more and more uncontrollable.

The fact that Victoria’s bedroom is offstage, and that she has no friends, means that we have to imagine her misery. All we see is the normality of everyday conformity — the sherries, the meals and the social occasions — but the psychological pain is always there, aching below the surface. And, like an ectopic pregnancy, the problem named Victoria grows and grows until it bursts out into a horrifying emergency.

Grief is a heartbreaking portrait of disappointed lives, which are often brutal in their repressive good manners and — especially in the case of Edwin — appalling in their emotional illiteracy. Leigh’s mixture of cheery comedy and frayed nerves makes for an uncomfortable evening, and the story stretches over the course of about a year, with a two-hour running time, and a pace that is slow, sad and thoughtful. If the acting was less engrossing, this would be a wearisome experience.

But the performances, directed by Leigh, are excellent. In the central role of Dorothy, Lesley Manville effortlessly conveys the impression of a woman carrying the weight of the world on her narrow shoulders. Her fragile and washed out intensity are utterly convincing. Likewise, Sam Kelly’s Edwin has a weary detachment that contrasts well with Ruby Bentall’s constantly irritated and combative Victoria. In the comic roles, David Horovitch, Marion Bailey and Wendy Nottingham excel. On Alison Chitty’s living-room set, which has been created with an encyclopedic eye for detail, the play moves quietly but inexorably to its awful conclusion.