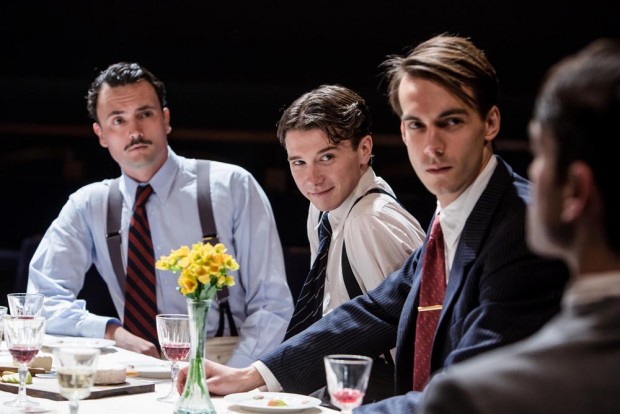 Over the past quarter century the reputation of toff playwright Terence Rattigan has been restored, mainly by strong stagings of his classic dramas, such as Deep Blue Sea. But his first smash hit, French Without Tears, has been the unicorn of his output — often talked about, often mentioned, often remembered, but never actually seen. Now Paul Miller, the ever-enterprising artistic director of the Orange Tree, has brought this unicorn into public view, allowing audiences to enjoy a joyful sighting of a rare beast.

Originally put on in 1936 in the West End, where it ran for more than 1,000 performances, French Without Tears is a light rom-com set in Miramar, a French seaside villa, whose owner, Monsieur Maingot, runs it as a crammer that caters to foreigners who want to brush up their language skills. Three fresh-faced Englishmen — Alan and Kit and Brian — are staying here to learn French in order to enter the British Empire’s diplomatic service, and they are joined by Commander Rogers, an older naval officer. All apart from Brian are fascinated by another resident, an attractive young woman, Diana Lake, whose brother Kenneth is the institution’s youngest student. Meanwhile, Maingot’s daughter, the teacher Jacqueline, falls for one of the Englishmen.

With enjoyable deftness, Rattigan sets up a situation where the competition of the men for Diana’s favours is fast and farcical: she plays off Alan against Kit, Kit against Rogers, and both against Alan. Then she learns that one Lord Heybrook is coming to join the school, and her thoughts turn to bagging an aristo. The men are contrasting personalities, with Alan being an aspiring novelist and pacifist while Rogers is a patriotic military man, and Brian’s hearty sexuality, which favours visits to brothels, is compared to Kit’s more sentimental neediness. Young Kenneth has a crush on Alan.

The atmosphere of the play is charming, with lots of good-humoured jokes about the French language (how do you translate a colloquial phrase such as “ideas above her station” into French? — surely not by using the noun “gare”!). It’s easy to yield to the warm embrace of a comedy that is never pompous or preachy. The essential Englishness of the play is a ready source of funny one-liners, and an evening trip to a local casino for the 14 July costume ball provides a great excuse for dressing up. The plot sails towards its well-judged and well-made end wafted by gales of laughter.

On the serious side, this is a play about blokes. In Rattigan’s view, men’s love of women overwhelms their senses, and jealousy between men is a question of honour. But no matter what happens to these sexual relationships, the default setting is male camaraderie. Blokes are great: you can call another man “babe” without batting an eyelid; you can appeal to their reason; you can discuss sex rationally with them; you can get drunk together. So all the competition between the men over women is never really about women: it’s all about the blokes. Men don’t want to understand women — they want to defeat them.

As well as being about male friendship, French Without Tears is also about being English, and about how Englishmen deal, or not, with their feelings. The best scenes explore the anxiety of the characters about their emotions, and their awkwardness in talking about these kinds of thing. When a woman tells Alan she loves him, he collapses in terror. Jacqueline’s verdict that “men are such blundering fools” sounds about right. Fear of women is a central theme in a play from a time when, while Continentals had sex, the English preferred hot-water bottles.

Paul Miller’s energetic and appealing production is fleet and funny. As Diana, Genevieve Gaunt wafts, lilts, sighs and purrs her way through the part, yet also suggests the character’s essential loneliness. Hilariously manipulative, her motto is “I’m a scheming wrecker of men’s lives.” By the end of a spirited production, her comeuppance is funny, but uncomfortable to watch — a reminder that ideas about women have improved somewhat since the 1930s. Alex Bhat nicely captures Alan’s Oscar Wilde side, while Joe Eyre and William Belchambers give Kit and Rogers a welcome depth. They are well supported by David Whitworth, Sarah Winter, Tom Hanson and Patrick McNamee as the Maingots, Brian and Kenneth. Yes, this is a unicorn alright — complete with a beautifully shining horn!