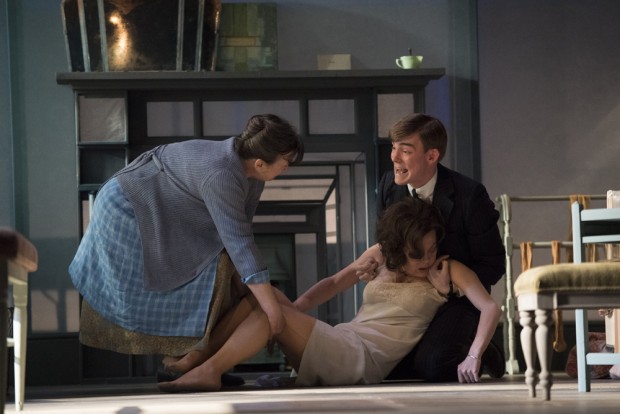 From being the Aunt Sally of contemporary British theatre, attacked by the angry young men in the 1950s and the new wave of social and political realists for three decades after that, playwright Terence Rattigan is now well and truly rehabilitated. For the past quarter of a century, both his major and his minor works have been regularly revived. Since Benedict Cumberbatch starred in a revival of Rattigan’s After the Dance at the National Theatre in 2010 it was only a matter of time before this flagship institution staged his best play, The Deep Blue Sea. And this revival stars Helen McCrory, who won awards for her Medea at this venue in 2014.

Originally put on in 1952, The Deep Blue Sea begins with the arresting image of a woman (McCrory) slumped in front of a gas fire in a squalid flat. She is Hester Collier, a posh clergyman’s daughter who has left her upper-class husband, a judge called Sir William Collyer, to live with her lover, Freddie, a veteran of the Battle of Britain and now an unemployed test pilot who drinks too much. In despair because Freddie’s love for her seems lukewarm (he’s forgotten her birthday), while her passion for him feels overwhelming, Hester has attempted suicide. As she says to her landlady Mrs Elton, “When you’re between any kind of devil and the deep blue sea, the deep blue sea sometimes looks very inviting.”

The play explores the various emotions not only of Hester and Freddie, who tells his friend Jackie that he “can’t be a ruddy Romeo all the time”, but also of Sir William, and another couple — Philip and Ann Welch — who react very conventionally to Hester’s plight. Rattigan described the play as “a study of obsession and of the shame that a sensitive, clear-minded and strong-willed woman must feel when she discovers she has inside her a compulsion that seems too strong for her to resist”. In the 1950s, of course, both homosexuality and attempted suicide were illegal, which is perhaps why Hester is drawn to Mr Miller, a mysterious ex-doctor and fellow tenant, who has been struck off the medical register for an offence that is only hinted at, but is probably homosexuality.

McCrory is always watchable, and here she makes a long journey from exhausted fragility, through a deep shame about her sexuality, to desperation about being abandoned, to a kind of grim reconciliation with reality. There are some moments of tenderness as well as despair, but also a fair lashing of anger. When she talks about her suicide attempt her voice cracks — with regret at her failure. Her range is wide, and the effect of her performance is compelling. The same, alas, cannot be said for Carrie Cracknell’s production as a whole.

Although the keynote to Rattigan’s work is emotional reticence, Cracknell has chosen to explore a more contemporary sensibility. The results are mixed, with a lack of coherence more in evidence than cohesion. On the huge, and rather wintery, Lyttelton stage designer Tom Scutt has created a shabby flat in a sombre and massive house, whose stairs, corridors and other flats are occasionally visible, inhabited by almost ghostly spirits, while cinematic music churns in the background. Against this claustrophobic environment, in which everyone seems to be living on top of one another, the passionate feeling, and overt sexuality, of the main characters is emphasised, which does make sense. The kissing and the clinches are very hot.

McCrory is such a star that the actors playing Freddie (Tom Burke) and Collyer (Peter Sullivan) orbit fitfully around her, while both Mrs Eldon (Marion Bailey) and Mr Miller (Nick Fletcher) seem under-characterised. At his best, Burke is convincingly frustrated, and finally makes his typically Rattiganesque self-sacrifice in a casual, almost stumbling way. However, the Welches (Hubert Burton and Yolanda Kettle) are more millennial than mid-century, he public school, she visibly pregnant. Too often, on the press night, the cast attracted mocking laughter rather than audience sympathy, while the final visual metaphor of a fried egg as a symbol of emotional survival is both powerful and, frankly, a bit bathetic. In my mind, this revival will live for ever as the “fried-egg Rattigan”.