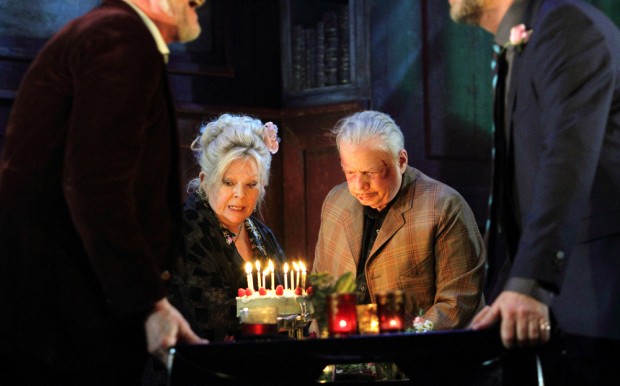 American playwright and actor Wallace Shawn is my nemesis. I’m never quite sure what to make of his work, and I’m usually tempted just to dismiss it out of hand. Since many critics do just that, I would be in good company, but would that be the right thing to do? Isn’t the fact that his playwriting is just so weird, so unusual, so unconstrained a good thing? After all, we want writers to be individual, to have a singular voice, so it would be pretty stupid to complain every time they delivered a play that was highly individual, and highly singular. Yet I still have mixed feelings after seeing his latest, Evening at the Talk House, which has premiered at the National Theatre in London, with Shawn in the cast.

The show starts with a monologue by a writer called Robert who has organised a 10th anniversary get-together at The Talk House club of the creatives and actors who were involved in his last stage play (he has since moved on to the more lucrative field of television comedy). You see, he’d got a call from Ted, the composer of the incidental music for the show, who said that the play — a medieval fantasy titled Midnight in a Clearing with Moon and Stars — “had been a very happy experience for all concerned”. So the old gang gather in what begins as a friends’ reunion play. So as well as Robert and Ted there’s Bill, producer, Tom, star actor, Annette, wardrobe supervisor, plus Jane, once an actress and now working as a waitress at the club, and Nellie, who runs the place.

But before the celebrations can get going, Robert spots Dick (played by Shawn), once a star actor himself and now a rather battered and bruised has-been, who seems to be getting regularly beaten up. By his “friends”. So although the atmosphere is pretty convivial, and the club (as designed by The Quay Brothers) looks warm and inviting, if a bit shabby, something is not quite right. There’s talk about presidents with names such as Walter Barclay and Mr Ackerley and Mr Rodman, and of elections that are held every three months, which is “irritating”, especially as Ackerley almost always wins. Okay, we are in a parallel universe, and the plot could swerve off at any moment.

And it soon does. So while everyone is busy chatting about showbiz, and gossiping about the shows they’ve been in, gradually a dystopian reality beyond the club’s walls is revealed. It is a world where television is the main entertainment industry while theatre has died away, and most of the programmes are soporific comedy shows, and the main criteria for judging them is their ability to make you laugh. At the same time, society’s undesirables are hunted down and disposed of by special death squads who can kill in a wide variety of ways, for the “humane” to the grotesque. As one character says, “I was basically the angel of mercy.” And then: “I did it in a nice way.” Some kills are performed surreptitiously, which means that by the time the victim dies, the murderer can be “far away” (a nice allusion, however unconscious, to Caryl Churchill’s 2000 play).

The chilling thing, of course, is not that this programme of killings takes place all over the world (led by the American government), but that these middle-class professionals are so indifferent to it. With the exception of Dick, they are comfortable in their lives, and accept the inhuman, even making sure to give it a human face. Simultaneously, it’s a play about self-regarding artists, self-regarding males and the way that success turns everything into self-regard. Behind the chatter, the global war on terror and the culture of fear looms out of the shadows, alluded to rather than explicitly mentioned. Okay, there’s a great deal of talk, talk, talk in a 105-minute show, and very little stage action, but the gradual unveiling of Shawn’s worldview and the sudden swerves of the plot are interesting in their own particular way. Watching it remains a strange experience, however, and somehow I never really felt a close contact with characters on stage.

Ian Rickson’s production is perhaps a touch too leisurely and too self-absorbed, as can be seen in the throwaway use of Stephen Warbeck’s music, although the cast mostly perform well. Shawn’s Dick has a rumpled defeated quality that is more attractive than the cheerful bonhomie of success as conveyed by Josh Hamilton’s Robert, Joseph Mydell’s Bill, Stuart Millgan’s Ted, Simon Shepherd’s Tom and Naomi Wirthner’s Annette. And although Sinéad Matthews’s Jane simply doesn’t look as if she could have experienced the horrors that she recounts, Anna Calder-Marshall’s Nellie is perfect as the ageing club owner. Like much of Shawn’s work, Evening at the Talk House is an acquired taste that I haven’t quite acquired. Its satire is a brilliant idea, but not much fun to watch.