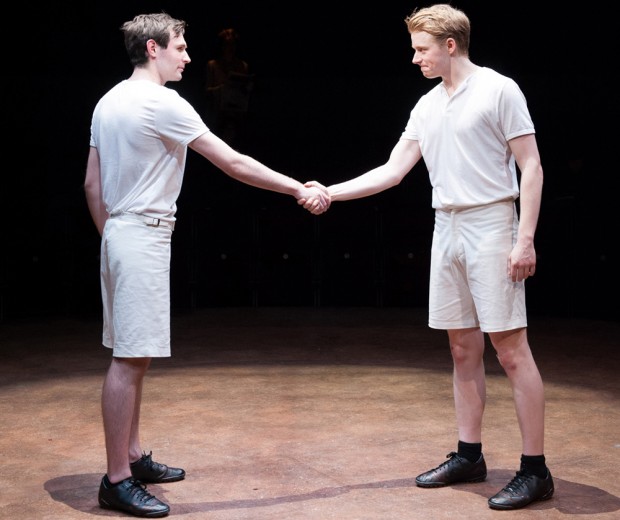 As the Olympic Park rises out of the desolation of East London, British theatre is also being regenerated by the sports fest that looms increasingly large on the horizon. Although it has recently lost its local authority funding, Edward Hall’s Swiss Cottage venue is no slacker when it comes to ambitious work. Having commissioned upcoming talent Mike Bartlett to adapt Hugh Hudson’s 1981 film, Hall has already secured a West End transfer for the play, in advance of its opening tonight.

Alluding to a line from that most English of inspiring poems — William Blake’s “Jerusalem” — Chariots of Fire tells the factual story of two athletes who competed in the 1924 Paris Olympics, the Scottish Eric Liddell and the Jewish Harold Abrahams. Both have powerful motivations for success: Liddell runs in order to prove that God is glorious while Abrahams competes to overcome racial prejudice. In both cases, neither can cease from mental — or indeed physical — fight, and their arrows of desire are firmly fixed on winning. But there are some distractions. After becoming the first person in 700 years to complete the Trinity Great Court Run, which involves running around the Cambridge University college courtyard before the clock finishes striking 12, Abrahams wins several other races. But when he loses to Liddell in their first race, he turns to a professional trainer for help. This attracts the disgust of some Cambridge dons, who see him as an unsportsmanlike Jew.

Liddell is more of a fair play man, but his belief in God has two effects: it is a spur to his competitive zeal, but it also holds him back. At the 1924 Olympics, he refuses to run in the 100-metres heat because it is being held on a Sunday, and he’s a devout Sabbatarian. In fact, for him, athletics seems to be a godly pastime until he is ready to return to China, his birthplace, as a missionary. Luckily, as far as the Olympics are concerned, he gets a chance to compete in another race.

At first, Bartlett’s adaptation basks in the afterglow of the film version, with its script by Colin Welland and haunting theme by Vangelis. On Miriam Buether’s stadium set, which places a race track in the middle of a remodelled auditorium, the men’s conflict is not only a sporting one, but also a psychological and cultural affair. Bartlett’s text outlines the tensions with clarity and points up the contrasts. The English Jew versus the Scottish Christian, both outsiders, yet both determined to define themselves through their sport.

At its best, the play gives you an idea of how it feels to compete, to lose, to win. It’s all about the agony and, if not exactly the ecstasy, at least the glory (cue Vangelis here — it never fails). At other times the symmetry of Liddell and his sister Jennie (who prefers charity work to sport) and of Abrahams and his lover Sybil (who sings Gilbert and Sullivan) seems a bit clunky. Still, Hall’s production is energetic, with muscular if rather crude choreography by Scott Ambler, and the huge cast of fit young men constantly running around the auditorium. When added to the unfocused storytelling, this contributes to a general feeling of messiness. Yes, the story needs running, but surely not all the time? Athletic exuberance can get very tiring. Definitely not a play for couch potatoes.