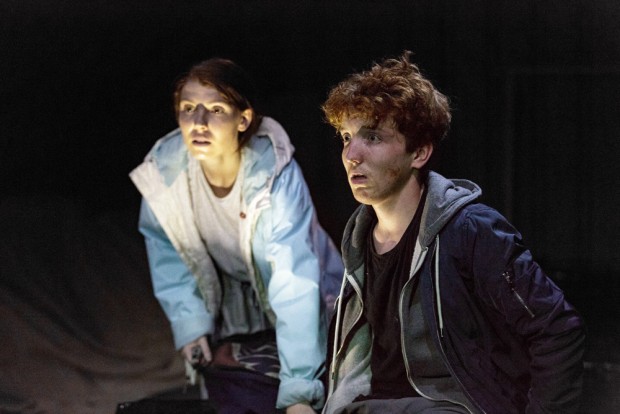 It’s hot. Very hot. In fact, it’s the hottest day of the year. But I’m okay. I’m in the hold of a boat crossing to the safety of another country, and I’m in the company of three other asylum-seekers. It’s dark and cool, but gloomy and uncomfortable. The hold has some black plastic-wrapped cargo, some hard crates and some wooden pallets. The walls are corrugated iron, a bit like containers, and there’s no electricity. It’s slightly echoey, and the air is stale. You get the feeling that anything could happen, and probably will. This is the world of Tess Berry-Hart’s engaging new drama.

In the pitch-black dark, a young woman called Joey turns on a light from her mobile phone battery. In the faint illumination we see that she is travelling with Iz, her naive young teenage brother, and they are sharing this claustrophobic space with the increasingly jumpy Sarah, who is more experienced and much more jittery. And who carries a knife. For the next 80 minutes in real time we learn much more about the lives of all three, and meet a new arrival, the American Kayffe, who provides some answers to what these people are fleeing from and some hard, hard truths about where they are going.

At first, it seems that Joey, Iz (short for Ishmail) and Sarah are travelling to France from today’s Middle East. The siblings are full of hope, with Joey encouraging her little brother to dream of becoming a waiter, and of them both earning enough money to pay off their trafficker. By contrast, Sarah has her Danish passport already sorted, and she comments acidly on the appearance of the other two, pointing out that their clothes and general demeanour mark them out as refugees. We begin to suspect that they will not be very welcome in France, and it slowly emerges that the channel they are crossing is not the one we first thought of, and the situation they are entering is unexpected and highly fraught.

Berry-Hart writes with enormous conviction and perception, and unveils her dystopic story, which nods slightly in the direction of Philip Ridley, with intelligence and emotional power. And her vision is very impressive: we already know a lot about the migrant crisis, so she goes beyond the platitudes and dares to imagine a weirder and wilder world of pain, anxiety and terror. And this immersive staging, directed with a mixture of lightness and power by David Mercatali, emphasises the emotions of the characters. Whenever the room is plunged into total darkness I get really nervous, and this responds to the nervy energy of the actors.

At the same time, there is plenty of time to think about the central metaphor of cargo, which of course is human more than inanimate. The traffic in human beings is a constant despite the changing geo-politics of Berry-Hart’s imagined future, a kind of horrific post-Brexit fantasy that reminds us strongly that being complacent is a bad option in today’s globalised world. But the different values attached to human cargo, which depend on age, gender and colour, contribute to a similarly powerful statement about prejudice and the colonialism of the body. In some sense, we are all human cargo — it’s just that some of us are more valuable, and vulnerable, than others.

Mercatali’s production is designed by Max Dorey, aided by Christopher Nairne’s crepuscular lighting, whose blackouts force us to concentrate on Max Pappenheim’s soundscape, with its evocation of the creaking boat, overhead planes and final port of arrival. In this tight and dangerous corner, Milly Thomas’s Joey and Jack Gouldbourne’s Iz convey mounting anxiety, while Debbie Korley’s febrile Sarah makes a good contrast to John Schwab’s ambiguous Kayffe, a superbly conceived character whose arrival lifts the play to another level. Although I feel that Berry-Hart has written herself into a bit of a corner, so that the play’s ending feels like a slight letdown, Cargo is both a harrowing story and an acute vision of future possibilities.