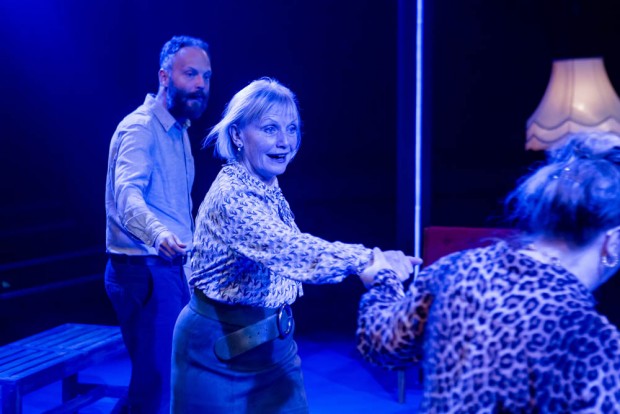 Q: How do you review a show that includes lines that ask “can my mouth swallow my mouth”? A: With difficulty, but I should be okay as long as I resist the temptation of being as surreal as Caryl Churchill is in this double bill of two short, but related one-act plays that were first staged in 1997. Collectively titled Blue Heart, each of the two has a separate name and each tackles a serious issue about family relationships with a breathtakingly confident imagination and thrilling theatrical panache. Each is also experimental in form and unsettling in content.

In Heart’s Desire, a family wait for the return of their daughter, and their anxiety and expectation are reflected in a piece that stops and starts over and over again, beginning with repeated dialogue each time, but developing in ever more amazing (and I mean amazingly unpredictable) ways. While this playlet focuses on a father and a daughter, Blue Kettle looks at mothers and sons. In it, a middle-aged man attempts to make money by fooling elderly women into thinking that he is their long-lost son. In both cases, the family is shown to be problematic, and language struggles to express our deepest feelings.

Okay, let’s rerun that. In Heart’s Desire, Brian and Alice are in their kitchen with Maisie, Brian’s sister, waiting for Susy, their grown-up daughter, to return from Australia. Alice sets the table, Maisie fidgets and Brian comes in, pulling on a sweater. He says, “She’s taking her time”, and Alice responds, “Not really.” This exchange is then replayed, with additions and variations, as for example when Maisie gives an account of Australian fauna, Alice suddenly decides to leave, someone calls about an accident, Maisie falls over, Brian insists on going to meet Susy, Brian and Alice bicker, Maisie sings and the body in the garden (whaaat?) causes guilt. And so on. Some variations involve speeding up the dialogue, some use only fragments of the lines. Most are hilarious.

By contrast, Blue Kettle is a much more sombre affair. Here 40-year-old Derek visits a series of elderly women, who gave up their illegitimate babies for adoption 40 years earlier, and tells them that he is their biological son. Despite the passage of time, they want to believe him. But his girlfriend Enid has doubts about the morality of this con-trick. As these scenarios develop, and Derek arranges meetings that become more and more dangerous, the words “blue” and “kettle” begin to intrude into the dialogue, which finally collapses into bleak variations on these two words.

Neither playlet is quite what it seems: in both, the theatrical form is blown apart by the emotional content of the story. In the first, the tone is shot through with anxiety, apprehension and alarm. The imminent arrival of a beloved daughter brings out the worst in the tense parents, who squabble and fret. They imagine terrible events, and strange creatures invade their home. Another child, the grown-up Lewis, has a drink problem, and his presence, however funny, complicates some of the variations. Churchill has a real tenderness towards old age, its foibles and vulnerabilities (there’s a sense that dementia lurks in the background), while at the same time being merciless about the tensions that most families incubate.

In the second, the tone is unmistakably cruel. Derek is playing a game of deceit that might be just a hobby, or maybe he hopes will bring him financial reward, but he only succeeds in hurting people. As language collapses under the strain of deception, he seems to become more and more isolated. At the same time, the uncovering of the past mistakes of these four older women stretches our imaginations back into the past, when unmarried pregnancy was shameful, a reminder that the position of women has changed a lot over the past half century.

All this and more is brought out in David Mercatali’s precise and exciting revival, an Orange Tree co-production with Bristol’s Tobacco Factory Theatres. On Angela Davis’s minimalist set, his cast rise to the challenge of a fiendishly difficult text, whose rapid reversals and sudden changes of pace must be a monster to learn. Andy De La Tour is a convincingly angry Brian whose cannibalistic monologue is a tour de force (no pun intended), while Amelda Brown’s sensible Alice and Amanda Boxer’s scatty Maisie are perfect foils. In the second half of the 95-minute double bill, Alex Beckett’s malicious Derek dominates the women in his life. Together with the other cast members they make this an event that is both playful and genre-busting, excruciating and exhilarating, alarming and truthful.