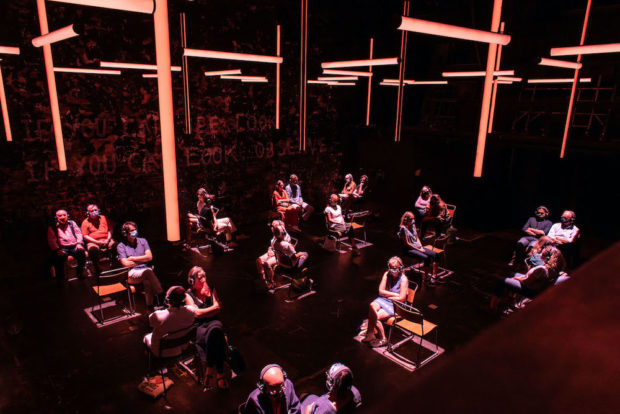 Yipee! Twenty weeks after the last time I set foot in a theatre, I was able to visit a venue once more. Hello there Donmar! It’s great to see you again. Not for a show featuring live performers, which are currently banned, but for a theatre experience in the guise of an art installation, which is allowed. Not only was there a distinct frisson to this experience, but the event itself — an audio version of Portuguese Nobel laureate José Saramago’s 1995 novel Blindness — was superbly accomplished, written by master penman Simon Stephens and featuring the recorded voice of Juliet Stevenson. It is also fitting that the dystopic story, about an epidemic, follows Caryl Churchill’s similarly metaphor-rich Far Away, whose run was cut short by COVID-19.

Saramago’s story is simple, but, like Albert Camus’s The Plague, even more resonant in the current climate. One day, a driver stops his car at some traffic lights because he can’t see anymore. He’s gone blind. This personal tragedy rapidly spreads and it soon becomes apparent that this form of blindness, in which the world turns completely milky white, is contagious. Within days, the whole city, then the country, is infected. Caught up in the chaos of the epidemic is an unnamed eye doctor, his strong-willed wife and some of their patients. As the government uses the army to herd the sightless victims into a disused asylum (basically a prison camp) for quarantine, it is clear that the doctor’s wife is the only person who retains her sight.

So the grueling conditions of the blind people’s lockdown, during which the soldiers provide, and then withhold, food, shoot people who protest or execute random individuals, are witnessed by the one women who can still see, although she pretends to be as blind as everyone else. At one point, she screams at the abusers: “I will remember your faces.” Rapidly, conditions in the asylum deteriorate, as food shortages, lack of medicines and the cruelty of the soldiers, as well as some inmates, reaches fever pitch. One ward grabs all the food; they demand money for it; they then swap food for sex; the other inmates rebel, led by the doctor’s wife. But as the blindness affects the entire society, everyone struggles to survive, even the dogs.

The suddenness of the epidemic, and the fact that it is unexplained, causes social norms to collapse. Grimly dystopic, Saramago’s story shows how individual courage and moral fortitude is pushed to the limits as people start to act like animals, with the strongest terrorising the weakest. Against these terrible odds, the doctor’s wife, despite her fears, tears and shocked realisations, tries to use her humanity to look after those worse off than herself, not just her husband but also comparative strangers. She well understands that only collective self-organisation can save them, and this is the moral of the tale.

Saramago’s vision is attractively balanced between cynicism, a would-be Samaritan turns out to be a car thief, and hopefulness: it is not only possible, he argues, to resist oppression, but necessary. No ideology is needed; only a humane feeling for other people. But he is also clear-sighted in showing how solidarity can be stressed out by deprivation of life’s necessities, and how violence is brutally present in all interactions. At the same time, the encounter of the doctor’s wife with a stray dog, who licks her bitter tears, is a powerful symbol of resistance, as hopeful as it is surreal.

Stephens’s version is impressively clear and economically written, balancing the horrific details of social breakdown with the interior monologue of the doctor’s wife, played with enormous sympathy by Stevenson, whose changes of mood and intonation perfectly convey the different episodes in the story. At first coolly detached, then increasing committed to the emotional anguish of the situation, her voice becomes an intimate friend. What makes the experience so much more intense than a radio play is the fact that the audience wear headphones so that her recorded voice can be right next to our left ear, as if we were her husband, or rather distant as she berates the inmates of another ward. Whether as narrator or character, she is always with us for the entire duration of the 70-minute journey.

Following King Lear, loss of sight can mean a better perception rather than a disability, and this version of Blindness is alive to current resonances. The announcements of the government recall not only the injunctions of various military juntas, but also strike closer to home, talking glibly of a “curve of resolution”. At other moments, the horror of a minister losing their sight during a press conference goes hand in hand with the feeling that often these events are designed to blind you with untruths. Likewise, the repeated notion of “individual responsibility” roots this universal fable firmly in an Anglo-Saxon context.

Compellingly directed by Walter Meierjohann, with an immersive binaural sound design by Ben and Max Ringham, who don’t really go much beyond their usual vibrating single notes and ominous rumblings, this is nevertheless a fascinating experience. Most of the show is experienced in total darkness, which sensitizes the mind to the story’s setting, the echoes of rooms and the screams of desperation. Lizzie Clachan’s design and Jessica Hung Han Yun’s lighting are used to brilliant effect, offering a red-amber-green sequence for a traffic stop, sudden flares of white for punctuation and a beautifully enjoyable ambiance of different kinds of light, all of which remind us of the importance of sight. If you can’t make it, the installation is also available digitally (as an audio or video file). As a live event, performed four times a day, Blindness is marvelously inventive and thoroughly compelling — shining real light in our current darkness.