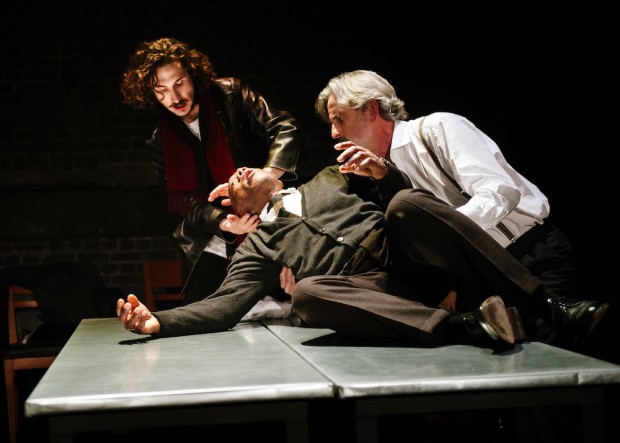 The idea of the plague has a powerful metaphorical aura. Antonin Artaud used it in his seminal book about the Theatre of Cruelty, The Theatre and Its Double, in 1938, and Albert Camus published a metaphor-rich novel called The Plague about a decade later. Now playwright and director Neil Bartlett has taken Camus’s book and turned it into a 90-minute stage version which is both powerful as a story and redolent with new meaning for a nation facing Brexit in a world of resurgent populism.

There is an appealing simplicity to the narrative of Camus’s 1947 novel: originally set in Oran, in French Algeria, the book tells the story of a devastating infection that starts off slowly but eventually leads to social and economic crisis as the city gates are closed and its people become prisoners. While the medical staff, led by Dr Rieux and the self-appointed administrator Jean Tarrou, fight to bring the plague under control, the city authorities struggle to maintain the essentials of life in spite of pressure from the population, which panics and finally riots. At the same time, as the deaths mount relentlessly, the authorities have to have recourse to burying the victims in pits covered in lime. Then, as suddenly as it began, the infection decreases and the city is liberated from its thrall. Clearly, this parable of how fascist ideology infects the public realm had a direct resonance for readers of the original novel.

Bartlett opens his version with the stage image of a public enquiry, with functional tables and microphones arranged in a row. The witnesses, once again led by Dr Rieux, line up to give their testimonies and to recall events that led to the crisis. Beginning with the sight of rats bleeding to death on the landings of apartment buildings, and in the streets outside, the idea of the rapidly spreading contagion is well conveyed and full of memorable moments: the shock of quarantine, the thriving black market, the death of a young boy, the pain of separation from loved ones. When supplies of a serum arrive, the question of who to give it to, and will it work, become central.

Bartlett focuses on a selection of five characters from the original novel: Dr Rieux, here played by a woman (whose references to her wife gives the play a very contemporary flavour), Tarrou (a rich man of means), Rambert (a young journalist), Cottard (a mentally unstable criminal), and Grand (a local government employee who is always comically struggling to find the correct word). In response to criticisms that Camus’s story is almost exclusively white and male (having no ethnically Algerian characters), Bartlett — who directs and designs the show — has cast his version with a more diverse mix of actors: Sara Powell as Dr Rieux and Burt Caesar as Grand.

The result is a clear and punchy retelling of the story, which feels both contemporary and carries a kind of afterglow of the original book. There’s a sense that this particular plague is happening in some sunny climate and yet there is nothing explicitly North African about either text or production. On the other hand, there are no vulgar references to today’s digital world: Bartlett focuses instead on the mentality of the people involved in this emergency. He is concerned not with the specific details of today, but with the general way people usually behave in times of social crisis. Like Camus, he is also concerned with combatting cynicism: he believes that although the plague of fascistic ideas never dies, it can be kept at bay by good people doing the right thing.

So although The Plague is not explicitly about Brexit, nor about the upsurge in populistic right-wing views, it does have a strong metaphorical resonance. The use of the word “camp” — so redolent of the Final Solution — has also now acquired the connotation of “refugee camp”. The play shows how bad ideas can be casually sown, how they can spread in a fury of panic and crisis, and how fighting them requires courage and persistence, often at the most cost to our nearest and dearest. Bartlett shows how the worst of humankind is the “solitary heart” of the deranged individual, and how the best is the hard-working person who lives to help others. As he concludes, “Nobody is trying to be a saint — they’re just refusing to submit.” And equally: “Joy is always under threat.”

Bartlett’s fast-moving production features some chairs, a couple of metal tables and a bare stage. Starting off as a formal enquiry, it quickly metamorphoses into a dynamic example of ensemble storytelling, with each character contributing to the tale, then coming together to act like a chorus, especially effective in the poetic passages that begin “In a time of plague…”. Powell, Caesar and the rest of the cast — Martin Turner (Tarrou), Billy Postlethwaite (Rambert) and Joe Alessi (Cottard) — act with restraint yet manage to convey a passionate sense of a whole city on a knife-edge. Dinah Mullen’s sound design, with its operatic chords, sudden gun shots and grim feeling of foreboding, adds to the mix. The Plague shows the triumph of hope over despair, but also reminds us that evil is always latent in our world.