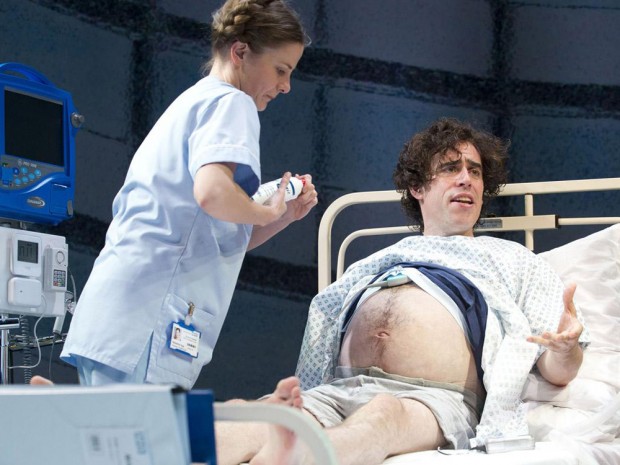 What is imaginative new writing in British theatre? In a genre that seems weighed down by the twin demands of naturalism and social realism, anything that pushes out the boundaries of the normal, or questions the ordinary, is surely to be welcomed. Long live leftfield theatre. Those playwrights who subvert the rule of things-as-they-are should be hailed as innovators. Easy to say. But are their plays any good?

This week’s example is Joe Penhall’s Birthday. Penhall is an award-winning playwright who first arrived at the Royal Court in 1994, in the era of Sarah Kane and in-yer-face theatre. His plays have always been quite naturalistic in style, although they have also had a quirky eccentricity at their heart, which is often enough to gladden the imagination. In his latest, Penhall throws himself into fantasy.

Birthday is about a thirtysomething couple, Ed and Lisa, who decide to have a second child. This time, however, they make use of the latest technology, which allows Ed to be both Dad and Mum. He has had the baby implanted into his abdomen and it will be delivered by Caesarian section. Lisa doesn’t have to do a thing — except to share her experiences and support his pregnancy.

It’s a very powerful conceit. As well as providing a comedy which is both entertaining and excruciating, Penhall deliciously subverts expectations while also commenting on gender stereotypes. By reversing the male and female roles, he shows how men make a much bigger fuss about reproduction than women do, while also illustrating how the roles of mother and of bread-winner are socially constructed.

It’s a funny and thought-provoking evening which bears the distinctive bruise of truth in its many humorous or stoical exchanges, immediately familiar to any couple who has shared this experience. There are gross details about bodily functions, typical bickering exchanges and a feeling that having any procedure done on the NHS is a journey fraught with obstacles.

Penhall’s criticism of the NHS, which after Danny Boyle’s Olympics Opening Ceremony seems like a rebranded national icon, is acute and simple. It still operates on a class system in which the doctors are public school and invariably absent from the wards, while the nursing staff are migrants from all over the world and so overworked that they can’t attend to your needs. As someone who was recently in hospital I can testify to the truth of this criticism.