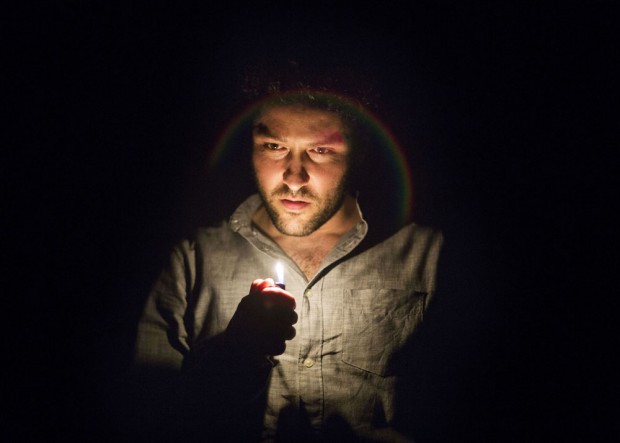 A play about belief? When I first heard this, I must admit I was immediately intrigued. After all, most of the people I know are either atheists or don’t usually talk about a world beyond our own. To use a hackneyed phrase, they don’t do God. But what if something happened to a group of us that challenged our mindset? No, that’s much too weak. What would happen if one evening something occurred that took our beliefs and smashed them into a thousand pieces? Like, definitively.

That’s the premise of Bryony Lavery’s brilliant new drama. It starts with a banal bit of social interaction. Joff and Marianne are invited to spend the night in the house of their near neighbours, Ollie and Maud, when their own home is flooded. They bring along Grace, their nine-year-old daughter, who stays upstairs with their hosts’ child, Joyous, while the adults eat a meal. The two couples quickly realise that they are completely different: while Joff and Marianne are secular through and through; Ollie and Maud believe in God.

As all four start to drink and then smoke some dope, they quickly loosen up, and their initial awkward exchanges melt away as they start to share their secrets. Our secular couple are deeply ashamed of their daughter Grace, who is described as a “difficult” child. By contrast, our religious couple are proud of their “perfect” daughter Joyous. There are other temperamental differences: the seculars are a bit uptight about letting go; the believers want to let it all hang out.

Then something ghastly happens that shatters both couples. From the start, we know the outcome will be tragic. The whole tone of this theatre piece is dark, really dark, and the venue, when you enter, is filled with ambient sound, loud, rhythmic and doom-laden. The stage is also invisible in a bible-black darkness, and both couples begin the show with loud expressions of horror. Then the story is told in flashback, starting with some pouring rain.

Lavery’s text is extremely economical, taut as a nerve-string. She doesn’t philosophise; she doesn’t discuss the issues of the day. There is no journalism here. She just gets on and tells the story. Little details bring the two mismatched couples alive: the hosts’ peanut sauce and white Rioja; the visitors’ embarrassed giggles as their hosts say grace. This is truly great new writing: fast, acutely observed and emotionally truthful. The pace is thrillingly alive and Scott Graham, who directs for Frantic Assembly, has found, along with his designer Jon Bausor, a perfect visual metaphor for this tale.

On an empty black stage, a simple frame provides the necessary doorways and creates the rooms of Ollie and Maud’s house. As the excellent actors — Christopher Colquhoun and Eileen Walsh (Joff and Marianne) and Richard Mylan and Penny Layden (Ollie and Maud) — move the frame around it feels like a potent metaphor for the rigidity of belief, and for its fragility. For although belief in God gives strength in this play, it also finally buckles and twists into emptiness. The moving frame gives the idea of a shifting worldview, suggesting a place where the sky might fall in at any time.

When the actors climb the stairs to the bedroom where Grace and Joyous are playing, once again we get a sense of a secret place — lit with neon strips — where holiness beckons, but where evil might also nest. In this story, the set radiates a strange power: it seems to suck the audience into a vortex of terror. I remember the moments of total blackout, the faces lit by lighters, the swelling of the music, the filmic angles as events spiral, and the excruciating silences. And the pain. Yes, the terrible pain.

This production, which opened at the Plymouth Drum theatre in February, is exciting, almost elemental. As the story flows with a current whose emotions are as strong as any flood, I marvelled at the imaginative force of Lavery’s vision. Her confident portrait of the religious couple is cliché-free and intriguing, with a kind of hippy Antinomianism motivating their actions: their smugness is stretched as surely as the more confused normalcy of their guests. Both couples are tested and found wanting. At the end of the show, I staggered out, momentarily shattered — and thanking God for having made me an atheist.