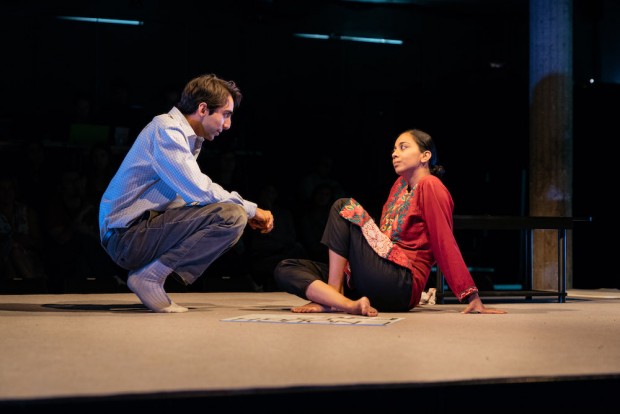 Director Madani Younis, who since 2011 has transformed the Bush Theatre in West London into one of London’s most outstanding Off-West End venues, is leaving in December, on his way to becoming the creative director of the Southbank Centre. For his last show at the Bush, he has chosen a project close to his heart, Vinay Patel’s An Adventure, an epic reading of one Asian family’s global migration story. It’s a typically ambitious choice, a beguiling tragi-comedy whose narrative is original and which, more importantly, makes its political points deftly and unobtrusively, using a three-part structure.

Part One, which covers 1954-59, begins outside Ahmedabad in India with an arranged marriage. Lively young teenager Jyoti is forced to choose which of five older men she will marry; she decides on 22-year-old Rasik, who is earnest but awkward. It’s an exciting start, with scintillating dialogue and a real freshness of vision. This feeling continues as the newly-weds travel to Kenya, where Rasik was born. In the suburbs of Nairobi, he enters into a partnership with David, a local black man who is forbidden by law from owning property, to farm the land and build up a business. But things go wrong when, during the Mau Mau independence uprising, David is implicated in the rebellion.

In Part Two, 1968-77, Rasik and Jyoti are in London, and the context is the industrial strife of the 1970s. While the husband is slowly working his way up in a company of surveyors, his wife becomes a trade union organiser involved in strikes for equal pay. The couple have two girls, Sonal and her little sister Roshni, who are growing up fast in a society which is deeply racist. Sonal has been spat at on the streets, but she is markedly less enthusiastic than her mother about political protest. When she finishes school, Rasik and Jyoti are divided about which university she should go to: in the north-east or much closer to home? This domestic issue becomes a catalyst for other strains in their relationship.

In the final part, after the second of two intervals in a show that runs for more than three hours, we reach 2018. By now, Rasik is in his mid-eighties and Jyoti in her late seventies. When her sister dies, the couple travel back to Ahmedabad for her funeral, and Jyoti is confronted by Joy, the 30-year-old daughter of her sister, who accuses her of neglecting her Indian family. With both Sonal and Roshni pursuing their own careers, Jyoti and Rasik also have the time to revisit Nairobi, but although they manage to find David, the reunion is not a success. It’s a scene that reveals the true horror of British colonial repression. The play ends in London with a bitter-sweet overview of two lives spent crossing the globe, but not, perhaps, in as gloriously adventurous a way as their younger selves might have wanted it.

Patel has chosen to tell this epic story in dialogue that is contemporary rather than historical. Even in 1950s India, the characters all speak as if they are Londoners talking today. And their attitudes and mindset are entirely modern. But there’s no sense of estrangement: instead, the exchanges have a rare energy and brightness which, especially at the start of the drama, is immediately captivating. When the action moves to London in the 1970s, the pace slackens and the mood changes as the hopes of the first part become the difficulties of the second. By part three, there’s sense of disillusion and even defeat. Not only have the couple grown old, but so has their marriage, and their world.

As an account of married life, An Adventure begins with the vivid image of the young couple, immersed in the Indian ocean, with Rasik — who can’t swim — holding onto Jyoti as both resist the currents that could sweep them out to oblivion. This image of the strong female ripples through the story. And this vision of the sea also suggests how the political currents of the globe, with India having become independent of British rule a few years previously and Kenya fighting against its colonial oppressors, affect both of them. And some moments are ironic: in Kenya Jyoti occasionally draws dangerously close in complicity to David, a Kikuyo and Mau Mau sympathiser (later activist), while Rasik claims to be above politics, itself a political choice. Things develop in London when Jyoti takes up activism, and proclaims the feminist idea that women will change the world. Ironically, the one woman who will change Britain decisively, Margaret Thatcher, is never mentioned.

This is a play not only about an arranged marriage and politics, but also about ethical choices. In Kenya, the couple have to choose whether to harbour a fugitive from the British army, or protect their newborn baby; in London they have to choose whether to support strikes or cross a picket line, and which university to send Sonal to; in the present day, they have to choose how to make amends to disappointed family and friends — and to each other. All these ethical choices are presented with great warmth and heart. It is clearly all so deeply felt. And Patel’s storytelling is, for the most part, rapid, clear and complex.

Younis, along with his designer Rosanna Vize, use an empty stage to give the main characters plenty of space to develop and, despite some insipid videos, his production is often beautiful, even if it runs out of puff towards the end. The scene changes are well-choreographed, and there’s a seductive warmth in the performances of Anjana Vasan and Shubham Saraf as the young Jyoti and Rasik, with a contrasting gruff understanding when Selva Rasalingam (Older Rasik) and Nila Aalia (Older Jyoti) arrive in part three. Martins Imhangbe is really impressive as the passionate David, while Aysha Kala doubles as Sonal and Joy. But although the play is hugely ambitious in its theme and scope, it does slow down and shrink in its latter stages, even if the final scene is a loving reprise. Somehow it doesn’t quite deliver on its promises. But if you approach the evening with an open heart and have patience with its failings, it will reward your attention.