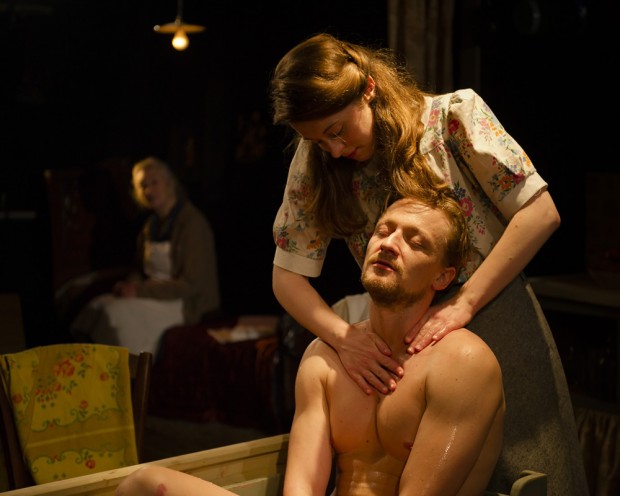 Last Thursday, I was at the Arcola Theatre to see Purge, Sofi Oksanen’s 2007 stage version of the story that she herself turned into a bestselling novel. Set in a farmhouse room in Estonia, the drama comes from the juxtaposition of two fraught situations, in two different historical contexts. Under Communism, Aliide and her sister Ingel fall under suspicion because the latter is married to Hans, a fugitive because of his involvement in the Forest Brothers army (the country was invaded both by the Soviets and by the Nazis so even unpolitical patriots managed to offend one or other of the two great powers). After they are repeatedly taken in for questioning, and finally tortured along with Ingel’s 10-year-old daughter Linda, Aliide embarks on a plan to save the whole family. Her motivation is an ancient one: she is in love with Hans, her sister’s husband, and this sibling rivalry colours the whole dramatic tale. After the fall of Communism, Aliide gets a visit from twentysomething Zara, who is also on the run, this time from her Russian gangster pimp. Under both systems, the communist and the capitalist, it is women – Oksanen implies — who bear the brunt of male oppression. This production, directed with vigour and intelligence by Elgiva Field, is a powerful and thrilling account of living under oppression in a rural room, where secrets are literally hidden under the floorboards. The actors, led by Illona Linthwaite and Rebecca Todd (as the older and younger Aliide) and Elicia Daly as Zara, are all excellent and convincing. By having both the older and younger Aliide on stage, Field allows the audience to see how the past can haunt the present, and how this family has not only been a victim of a Communist purge, but is finally able to purge its own demons. Men don’t come across very sympathetically, but the women show how they can be redemptive as well as victimised. A fascinating story told with enormous conviction.