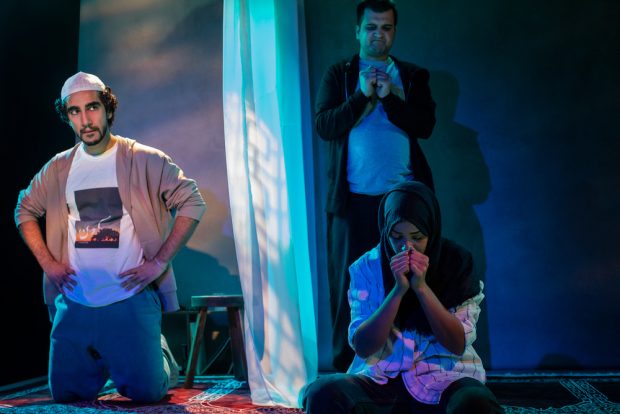 Since 9/11 there has been considerable interest in staging stories about British Muslims, and the best of these avoid the stereotypes of arranged marriage and terrorism. Although religious observance, in so many plays, is often represented as a ritual, a spectacle, rather than a part of human experience, the same cannot be said about Shahid Iqbal Khan’s new play, 10 Nights. This coproduction by Graeae and Tamasha explores how belief can be a psychological and emotional journey, a way of understanding the world. Many Muslims doubtless know this; so the play serves to educate the non-believers.

The 80-minute one-man show, although another actor appears briefly and there is an onstage BSL signer present at all times, centres on Yasser, a cool young urban man who decides to perform itikaf, the final 10 nights of Ramadan, during which the most devout Muslims stay day and night at the mosque, to pray, fast and meditate. Isolated from everyday cares, participants can concentrate on the ibadah, which is the contemplation and worship of Allah, and read the Quran. At first, Yasser casually agrees to this period of intense self-scrutiny, partly to please his father, who is very traditional and who beams with pride at his son’s apparent religiosity, but soon this voyage of discovery leads to the kind of revelation that is more psychological than spiritual.

Yasser’s other reason for submitting to the discipline of itikaf is the fact that he feels responsible for the death of Aftab, his best friend, in a car accident. This memory is complicated by his feelings for Aneela, Aftab’s girlfriend, and Usman, a former friend who is proudly more devout than our streetwise hero. Khan’s text is presented as a one-man show, but the actor — Zaqi Ismail — plays not only Yasser, and his inner monologues, but also all the other Muslims who are part of the mosque, from his father to his uncle Hakim, and religious mentor Salah, who teaches him the ritual cleansing and other rites. There are a lot of good-natured jokes about excessive shows of piety, and much light satire about the Muslim community.

But the deprivation of his mobile phone forces Yasser, who incongruously wears joggers, sports socks and sandals, to concentrate on his prayers and himself. Alone in his “little hovel”, a screened corner of the mosque, he feels more and more panicky as the 10 nights progress. He really is out of place here. As he says his prayers, performs his fasting and joins in with the isolated community, helped by Salah and interacting with Usman, who has just opened a new takeaway and is much more successful at making money, Yasser experiences both a gradual spiritual awakening and a fuller understanding of himself, his own psyche and his own life story. Arabic and Urdu give the piece a sense of authenticity and the way that the 99 names of Allah are explained suggest that this piece is also a crash-course in Islam for non-Muslims. But that is exactly one part of its fascination.

So amid all the jokes about shared bathrooms and the gnawing hunger for chips and pizza, there is also a description of Layland Qadre, the Night of Power, which can fall on any of the last 10 nights of Ramadan and which is a “night of worship better than a thousand months of worship” — a night of forgiveness “when angels descend on earth”. And, by the end of this elegantly written story, there is a real sense of emotional connection with the central character, and his guilt, as well as a feeling of respect for anyone who is a religious believer, however casual. What comes across most clearly is the intimate link between religious spirituality and psychological healing.

This affecting, funny and occasionally powerful play is beautifully acted by Ismail, who does a great job of creating the characters of whole group of British Pakistani men, representing them in all their variety. Kash Arshad directs a show which while being low on overt dramatic conflict, is strong on the sensation of an emotional journey. Although the set, designed by Khadija Raza, has a cut-price aesthetic, being a couple of prayer mats, a flimsy curtain and a book rest for the Quran, the piece’s accessibility is, as you’d expect from a Graeae coproduction, excellent.

The script, in Urdu as well as English, is projected on the background, while Sumayya Si-Tayeb (who alternates with Chandrika Gopalakrishnan) both performs the text in British Sign Language and offers a largely comic counterpoint to Ismail’s presence. Her raised eyebrows or astonished grimaces at some of Yasser’s dialogue add to the enjoyment of the piece. A second actor, Safyan Iqbal, making his stage debut, plays Aftab, although Arshad has not successfully integrated him into the show. (A programme note explains that the play has changed radically in rehearsal from two men playing Yasser to one, but then that’s surely what rehearsals are for.) Never mind. 10 Nights is a very enjoyable, thought-provoking and moving play.