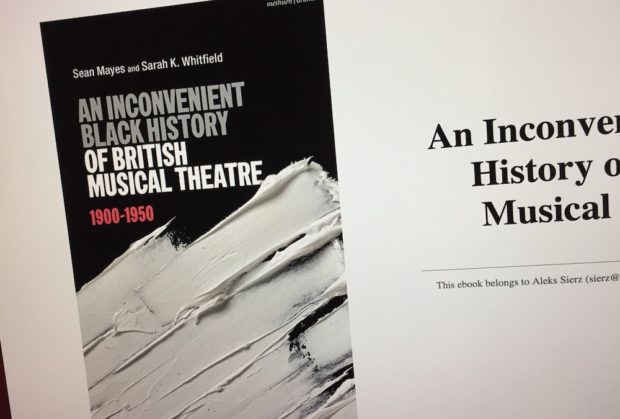 Quote of the day: “This book should not be relevant. The substantial presence of Black practitioners in British musical theatre from 1900 to 1950 should not be news, and it should not be surprising. The diligent work of many Black scholars and archivists, in building and maintaining the histories of the way in which the African diaspora has shaped popular musical theatre, has made this information accessible for a very long time. Black scholars and scholars of Colour have extensively demonstrated how Black theatre performers, musicians and practitioners worked internationally from 1900 to 1950. Such work has been supported by significant scholarship elsewhere from early twentieth-century recording histories and popular music histories. Yet, despite this, the historiography of British musical theatre has avoided incorporating this story. Peter Fryer notes that ‘white historians, almost without exception, have done their best to deprive black people of their history […] they have consistently belittled or wiped out the black past’.” (Sean Mayes and Sarah K Whitfield’s An Inconvenient Black History of British Musical Theatre 1900–1950)