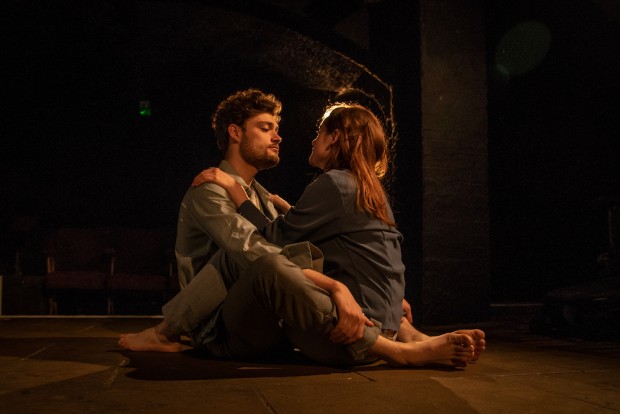 Last night, I went, for the first time, to the Barons Court Theatre, which is staging a compact revival by First Floor Presents of Sam Steiner’s Lemons Lemons Lemons Lemons Lemons, his classic 2015 two-hander. The 80-minute play, which has an immediately engaging non-linear form, is about the relationship between Bernadette, an ambitious lawyer, and Oliver, a laidback musician. After they meet at a pet cemetery, they experience all the usual ups and downs of young love — until national politics intrude on their daily life. A populist party has won an election and passed a Quietude Bill through parliament: it radically limits the amount of words any citizen can speak to 140 a day. This means that Bernadette and Oliver have to relate to each other by finding various other ways to communicate, from Morse code to free-form drumming. Despite all the protest marches, the law tightens its grip. In Steiner’s nimble writing, the big issues of censorship, free speech and democracy weave effortlessly though the quick-fire scenes, provoking ideas about how each of us would react in similar circumstances. This fringe revival is neatly directed by Hamish Clayton, and features two excellent performances from Jemima Murphy, as the passionate Bernadette, and Charlie Suff as the politicized Oliver. On designer Gareth Rowntree’s neat set, this compelling production is both emotionally true and intellectually exciting: Steiner’s dystopian story remains sharply, indeed increasingly, relevant and thought-provoking. It made me ache to go on another anti-Brexit protest march.