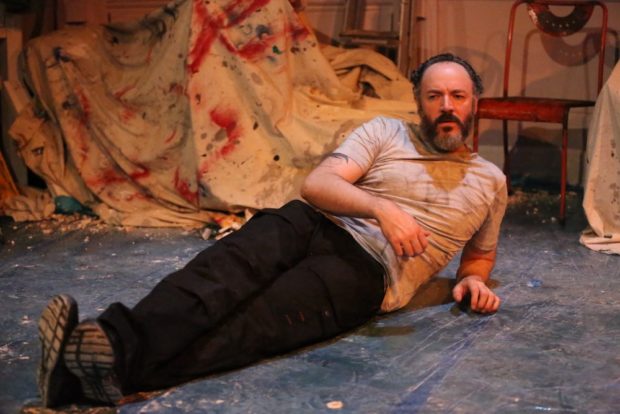 Yesterday, I took a break from my sunny local park and turned a room in my house into the Finborough fringe theatre. You know the kind of thing: very small, very dark, very hot and airless, with the occasional blast of air con. It’s a good environment to experience Gerry Moynihan’s brilliant monologue debut, Continuity. As you might be able to guess from the title, the character Pádraig Devlin is a dissident Irish Republican who has been convinced that he should continue the struggle for the sake of political purity. The Easter Rising of 1916 is “unfinished business” and the Peace Agreement of 1999 is a “sell out”. There can be no compromise until there is a free, independent 32-county Ireland free of Brits. In this atmosphere of permanent struggle, Pádraig is part of a group with the powerful Joe and the more repressed Eamon, whose father was executed as a grass by Pádraig’s father during the Troubles. Into this brew of seething resentments and violence steps Gorka, a bohemian from Barcelona. As Pádraig begins a relationship with her, his commitment to the cause slackens, and he starts to blunder during operations. The personal connections and tensions that arise as these lonely angry men plot revenge against the system are psychologically convincing and fiercely compelling. Moynihan explores the men’s fanaticism and the effects of their frustrated masculinity on their political beliefs. The piece is not only strongly written as an account of battered humanity, but this 2017 production, directed by Shane Dempsey and performed with enormous conviction by Paul Kennedy, is riveting to watch, despite the rather rudimentary filming (whose crepuscular lighting occasionally obscures the action). In the wake of the Dominic Cummings scandal, the claustrophobia of the piece, exemplified by the line “We all have to make sacrifices”, comes across strongly. Both Dempsey and Kennedy use the space really well and the expressionistic dream sequences are powerfully effective. Continuity is an excellent 75 minutes of tense theatre, which continues the venue’s great track record of presenting great new writing.