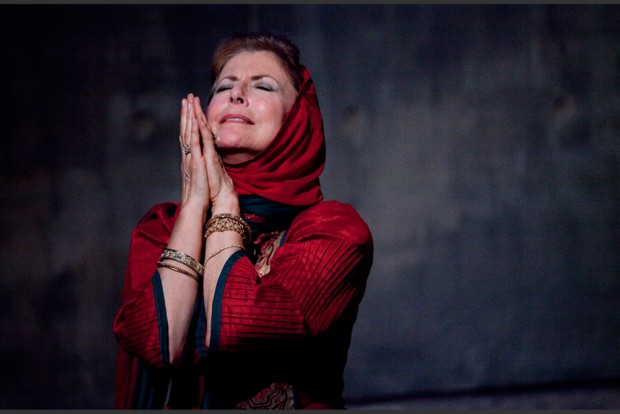 Yesterday, I was at a new production of Sophocles’s Antigone at the Southwark Playhouse. In an elegant translation by Timberlake Wertenbaker, it is yet another example of the contemporary thirst for relevance. Although this version of the story of how one of the daughters of Oedipus defies the ruler Kreon and is put to death for trying to bury her brother is set in today’s Middle East, the text has not been updated so we get lots of characters dressed in Arab garb talking about ancient gods. This simply doesn’t work. It’s incoherent. And although director Tom Littler tries to liven things up by fielding a large chorus, which sings and dances to some moody music, the end result is that you can’t really hear what they say, or understand most of the lines. The acting is pretty uneven too. Eleanor Wyld’s Antigone spends too much time flapping her arms, and her exchanges with Jamie Glover’s Kreon too often descend into shouting matches. Even Edward Petherbridge’s cameo as the blind seer Tiresias feels like some histrionic tribute to the RSC of the 1970s, more suited to an open-air venue that to the small fringe space he’s actually performing in. What you miss is the essence of the original play: Sophocles’s unfathomable feeling of the tragic contradictions that invest our lives with a meaning deeper than what can be experienced in a shopping mall or in front of the telly. By trying too hard to be relevant, the play offers only increasing dollops of banal everyday sameness. Ugh.