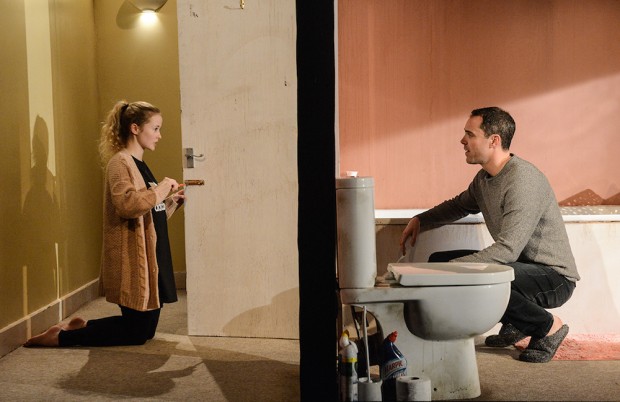 Theatre is a business as well as a craft. In an age of austerity cuts, and at a time when most Off-West End venues have studio spaces as well as main stages, this can lead to practical problems. In his programme note to Georgia Christou’s debut play, Yous Two, Edward Hall — Hampstead Theatre’s artistic director — explains that his theatre has lost £122,000 due to a 14 per cent Arts Council cut. Since this threatens his Downstairs studio space, which costs some £100,000 a year to run, he is now actively promoting the work staged on this small stage. As he points out, inviting the press to cover these shows will “remind the Arts Council that Downstairs exists” — and suggests that the funding body has little idea of what goes on at the venue.

Like Clare McIntyre’s Low Level Panic, Yous Two is set entirely in a bathroom, although this one has a manky carpet, a faint smell of piss and is in need of really good coat of paint. It belongs to Jonny, the tenant and 36-year-old single parent of his 15-year-old daughter Billie, whose mum committed suicide soon after her birth. In the bathroom, Billie chats to her dad, and entertains her school friends Rachel and Fudge. She is a lively, intelligent teen who gets great grades for maths and science, and has ambitions to go to a better school, as well as to uni. But when she gets unexpectantly pregnant, her future is suddenly put in doubt.

What has begun as a comedy, with Jonny in the bath and Billie waiting outside while bursting for a pee, rapidly turns into a more serious and more touching story, one which raises various issues about parenthood. Jonny, for example, is a parent, but he’s unemployed and a bit of a wide boy (he is a part-time ticket tout); at various moments, his teen daughter comes across as more mature than he is, and you can see that she often parents him. So will she have to sacrifice her own life ambitions in order to look after her feckless dad? But it does not follow that Jonny has been a bad father: after all, Christou wryly points out, isn’t Billie a wonderful person? A tribute to his caring skills.

If the play questions, in no uncertain terms, traditional definitions of fatherhood (wage earners) and motherhood (full-time carers), it also disputes other notions about genetics and biological fundamentalism. Billie’s mum was mentally sick, so does that mean that she is vulnerable to the same illness? Is a tendency to post-natal depression something that is carried in your DNA? Can suicidal feelings be hereditary? These are hefty questions and it is a tribute to Christou’s writing skills that she handles them with a light touch — and with considerable passion and humour.

What’s particularly impressive is the playwright’s attention to the detail of the exchanges between parent and child, how Billie deliberately provokes Jonny by using explicit descriptions of a friend’s underwear, while her dad wearily replies, “Behave.” And then there’s an exact sensitivity to class: one of Billie’s classmates “gets thrush cream from her mum”, who “makes documentaries for Channel 4 so she’s probably quite used to stuff like that”. The mixture of a teen’s growing perception of class and social relations with a daughter’s negotiations with her parent is exactly conveyed. Likewise, I appreciated the combination of directness and tenderness. Lovely writing.

Yous Two is a character-led play, and Billie is both child and adult, switching between a childish desire to be cuddled by her dad and a much more mature attitude to life: when he tells her how much money he has lost on a scam, she turns into an angry grown up, berating him for his folly. While he is a working-class lad who was never any good at school, she is an upwardly mobile young lass who gets great grades in the toughest subjects. But if he is a bit unconventional in his love of freedom, she is more straight: her ideals are those of suburban normalcy. Mortgage for a house, a good education and a regular job. The only thing that might stop her is dependency on Jonny. But this relationship is reciprocal.

Both Rachel and Fudge are also given lines that question the capabilities of their own parents. Rachel says that her mum and dad don’t get on, and she thinks her father is having an affair because he owns two phones; she is also worried when Billie wants her to help her give birth. Meanwhile, Fudge, the cool kid in class, has his own ideas about his extended family — “twenty six of us on Christmas Day”. They will love Billie, and they will help look after her child. At one point, he says, “If it was a boy I’d wanna call him some hench name like Aslan.” Hilarious.

With its 70 minutes distributed over nine neat scenes, Yous Two is a short play but a resonant one. Chelsea Walker’s vigorous production, with a cutaway design by Rosanna Vize, has four excellent performances: Shannon Tarbet’s Billie is sparky but also thoughtful, even melancholic, often more mature than her dad (Joseph Thompson as a lovable rogue). Leah Harvey’s Rachel and Ali Barouti’s Fudge are likewise vivid character studies, completely convincing. Parenthood can be both empowering and fragile, and Christou’s debut is thrilling in its aplomb and in her potential. Definitely a name to watch.