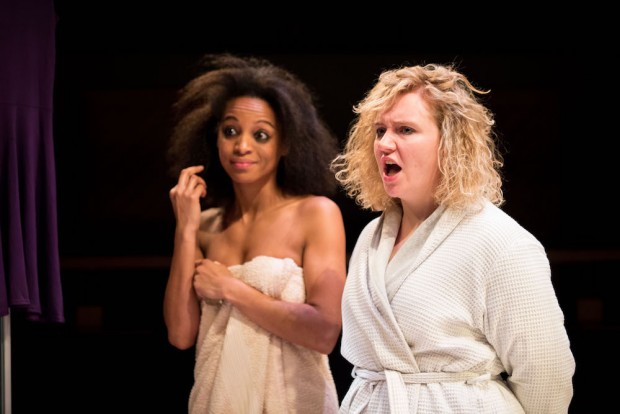 The 1980s were a great decade for British women playwrights. During those Thatcher-dominated years, Caryl Churchill produced two world-class masterpieces — Top Girls and Serious Money — while a host of other playwrights, such as Timberlake Wertenbaker, April De Angelis, Charlotte Keatley, Sarah Daniels, Winsome Pinnock and Andrea Dunbar lit up our stages. Many of them experimented boldly with the structure of their plays, using time shifts and different storytelling techniques to give a forceful picture of women’s life experiences.

The late Clare McIntyre’s Low Level Panic has a great title for a 1980s feminist drama. In three words she presents the emotional landscape of her play: uncertain, edgy, angsty. Set solely in the bathroom of a shared house, it shows glimpses of the daily life of three twentysomething women: best friends Jo and Mary, plus their flatmate Celia. Jo is a down-to-earth northern lass who’s worried about her weight and her body image; Mary is a nervy bottle-blonde Welsh woman who sometimes mothers Jo, and sometimes leans on her; Celia is more middle-class, yet equally insecure.

Although McIntyre sketches her characters vividly, and with good humour, they don’t have much to do in the series of vignettes that show them chatting, washing, dyeing a dress, dressing up to go out and then getting ready for bed. The central event of the play, a party which all three attend, happens offstage. In between scenes which accurately illustrate the everyday nature of female friendship are a series of monologues in which the women invite you into their thoughts: Mary remembers being sexually assaulted by a group of young men; Jo describes her masturbation fantasy; Mary analyses a piece of sexist advertising.

As Mary says, “We’ve got to understand why we think whatever it is we do think otherwise how are we meant to live with ourselves?” It’s a question of personal identity. All three women explore issues relating to body image, self-confidence and pornography in a way that hasn’t really dated since the play was first staged at the Royal Court in 1988 (when Jo was played by Caroline Quentin). So while this revival by Chelsea Walker, designed by Rosanna Vize, puts now-retro 1980s objects, such as rubber shower mixers or cassette players, on the stage, the play’s ideas still seem relevant and its dry comedy as sharp as ever. The main problem remains McIntyre’s preference for small snapshots rather than a full story.

It’s also interesting that the women don’t talk about their parents, or their jobs, or their film or music likes and dislikes. They mainly talk about how they feel about themselves, and about men. What kind of men they like, their trouble with men, their fantasies of men. Feminist or not, it’s a pretty man-centred play despite its intimate bathroom ambiance and sense of confidences shared. On the other hand, it is a joy to see conversations between women that capture difficult subjects such as ambivalence, and insecurity, and contradictions. There is so much that is familiar: problems with shoes, problems with dressing for a party, problems with sharing hot water in a shared house.

Walker’s cast members — Katherine Pearce (Jo), Sophie Melville (Mary) and Samantha Pearl (Celia) — are fully committed at all times, and the opening image of Jo, naked in the bath, is as strong in its explicit nakedness and vulnerability as ever. They convey McIntyre’s sense that female friendship is all about feelings, and successfully communicate the streak of sadness, even melancholy, that runs down the face of the play like mascara mixed with tears. But despite the many subtle moments, like when Jo declares that she is beautiful and then glances uncertainly at a mirror, this 80-minute three-hander lacks dramatic drive and is more a curiosity than a classic.