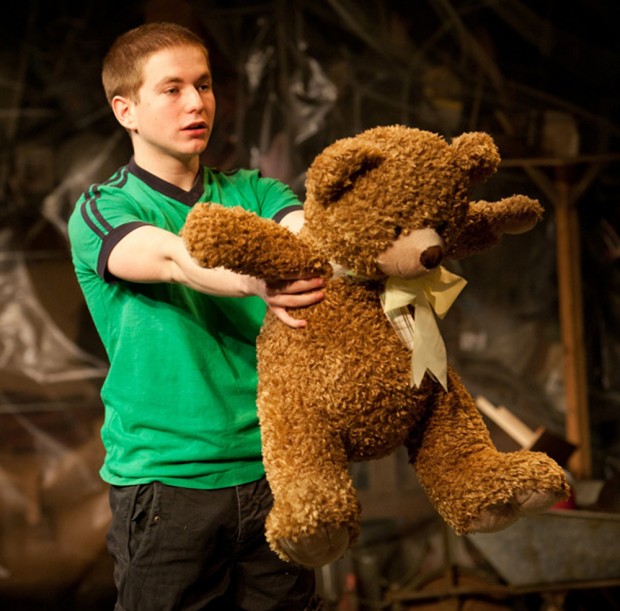 In contemporary British drama, kids are usually either suffering or doomed innocents. But Winterlong’s Oscar is different. He is a loner who was abandoned by his schoolgirl mum and his scary dad at the age of four years old, and tries to make his way in a chilly world armed only with his small, but powerful, reserves of love. The writing throbs like an infected wound, so you can see why actor Andrew Sheridan’s debut play was joint winner of the 2008 Bruntwood Prize for playwriting, receiving its premiere at the Royal Exchange Theatre in Manchester earlier this month, and is now visiting the Soho Theatre in London.

The story is simple. Given away by his parents, Oscar lives with his grandparents John and Jean, and we watch him grow up to the age of 15. First we see his teen mum Helen name him after a stranger, a boy she meets by chance; then we see John meet a dodgy character in a park; then Oscar meets a man while bird watching; then he meets his mum again; then he loses one of his grandparents and has to face the fact that the other really doesn’t love him. In a beautifully symmetrical final scene, the teenage Oscar — on his 15th birthday — helps a young stranger.

Sheridan’s writing is tight, sometimes like a fist, sometimes like a strangled cry, and sometimes like a poem. Feelings constantly press against the everyday dialogues, threatening to burst them wide open. Instead of presenting his material in a naturalistic way, Sheridan creates a highly artificial world in which emotions are openly expressed, symbols proliferate and the shabby ordinariness of family life gets repeatedly illuminated by the fireworks of what is effectively an emotional tone poem.

Yes, this is a genre-busting play. It shows a world where men behave very badly, where perverts prey on youngsters in parks and young women are constantly victimised. Sheridan represents this as a gigantic swill of bodily fluids: there is a constant rain of piss, shit, pus, milk, spunk and spit. Violent images — of dead dogs, dead cats, terminal cancer and the smell of decay — imprint themselves on the mind. The effect is of reality seen through a distorted, smashed glass, a kind of apocalyptic universe of pain and loss.

Shit happens. But it takes a real poet of the theatre to find the gems in the rotting bodies of dross. Amid all these unhappy people, these lonely souls, Sheridan is able to show the kindness of strangers, sudden connections between odd bodies that go a little way to making up for the dry misery of family life. If the stage image of young Oscar with a jumper pulled over his head represents the anguish of a loveless childhood, the final image of two hands coming together offers the idea of hope. As well as the keynote of despair, there are also flashes of poetry: a white horse walks by in the fog; birds sing and fly away; a bath scene tugs at the heart.

Given that the play is so different to the usual naturalistic fare, director Sarah Frankcom (with help from designer Amanda Stoodley) struggles a bit to find a performance style that does it justice, but this struggle is itself welcome. It’s a sign of vitality. Her committed cast is excellent: Harry McEntire is a shy, enthusiastic and finally heartbreaking Oscar, while Paul Copley’s dry John is matched by Gabrielle Reidy’s stiff Jean. Rebecca Callard’s Helen is full of quiet pain. As Winterlong ends, you feel both saddened by the vividness of its portrait of loneliness and exhilarated by the sheer brilliance of the playwriting.