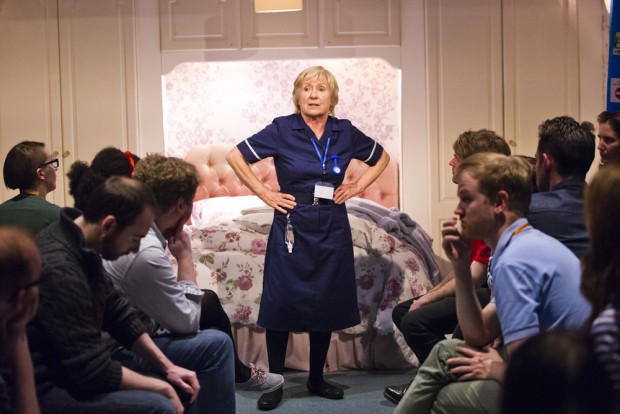 The NHS is us. Early in this new verbatim play about the National Health Service, one of the characters says that when a sample of Britons was recently asked what the most important institution in the UK is, six per cent said the monarchy, 12 per cent said parliament, but a whopping 48 per cent said the NHS. It is central to our national identity, and arguments about its condition are a vital part of the general election campaign — which explains why the Royal Court has programmed this show now.

Michael Wynne’s verbatim documentary about doctors, nurses and hospital staff has an epic feel, covering not only health workers but politicians, policy-makers and historians from all around the country. It is the result of some 18 months of research and interviews, and, as you would expect, the material ranges from the banal (many health workers are overworked) to the unforgettable (a description of the smell of a patient’s infected, rotting flesh). As its title rather archly proclaims, this is a story not about cynicism (who cares?), but about people who care.

In part one, called Symptoms, the audience is taken to a meeting room at the back of the theatre building — dressed up to look like an A&E Department — and various characters convey some of the confusion that afflicts these places. Then the audience is split into three groups and taken on a tour of the theatre, up and down the back stairs and offices, where an assortment of consultants, nurses and other health workers explain the stresses affecting the NHS. Sympathetic characters such as Louise the GP alternate with more philosophical ones, such as a Voltaire-quoting cardiologist, who memorably sees healthcare as “part of the entertainment industry”.

After a short tea break (in which you can literally enjoy a cuppa), part two is called Diagnosis. Now the audience is seated in what looks like a hospital waiting room to watch an inconclusive debate about recent health reforms, as well as hearing various ideas about how hard it is to improve the NHS. The terrible, harrowing, case of the Mid Staffordshire hospital scandal, where the shortcomings in care were exposed by campaigners led by Julie Bailey, is explored.

At its best, the show recounts some memorable anecdotes and introduces us to some appealing characters. Philip Arditti, Eileen O’Brien and Elizabeth Berrington play Jonathon the GP, Marjorie the midwife and campaigner Julie Bailey. Jonathon almost dies when he fails to properly diagnose his own appendicitis, declining to go to A&E because he was “just afraid I was wasting somebody’s time”. Marjorie wanted to be a nurse from the age of seven, and her account of her work as a midwife is warmhearted and practical. Other characters include Dave, a Brighton paramedic, and Dr Malhorta, who argues that most illnesses are “lifestyle related”.

What the play fails to do is to create a strong central metaphor, a compelling narrative or an optimistic vision of the future. As such, and despite the welter of interesting facts and opinions it throws up, it is not as good as Stella Feehily’s agitprop entertainment This May Hurt a Bit or Nina Raine’s hospital drama Tiger Country. Once again, a gimmicky promenade production tries to make up for the inadequacies of the playwriting. No fewer than three directors — Debbie Hannan, Lucy Morrison and Hamish Pirie — are needed to marshal the large cast, which includes Robert Bathurst, Paul Hickey, Martina Laird, Nathaniel Martello-White and Vineeta Rishi, who play dozens of roles, supported by numerous extras. As in the NHS, everyone works really hard, but the results are distinctly mixed.