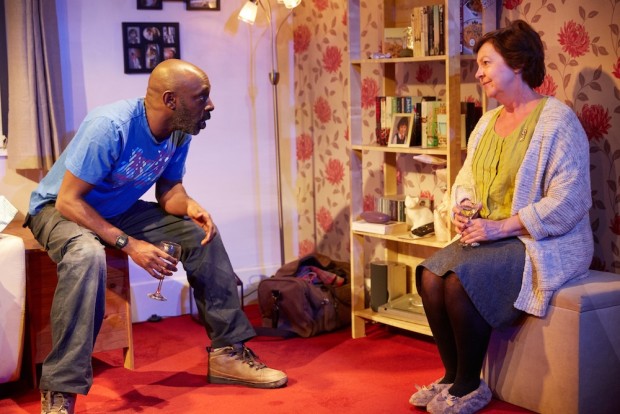 Building boom. Despite years of austerity, London theatre is enjoying an unprecedented amount of new theatre construction, as well as refurbishment of old venues. There are new venues, such as the Yard, the Park and the Coronet, and Nick Hytner and Nick Starr’s huge new Bridge Theatre opens in October. (Already, there are posters on the tube advertising its first production, Richard Bean’s Young Marx.) Last week also saw the opening of the studio space at the refurbished Bush, with a new play, called While We’re Here, by master penman Barney Norris.

As you’d expect from the playwright who wrote Visitors (2014) and Eventide (2015), this new one is an ideal studio piece, in which it is important to hear every word and intonation, and see even the smallest gesture. Norris’s writing has such a hyper-realistic subtlety, a calm and undemonstrative natural feel, that you need to get up close to the actors to really appreciate it. And as near as possible to the set, designed by James Perkins, which shows the living room of Carol’s house, a tidy rather thinly decorated place which clearly belongs to someone who is rarely there: although there are pictures of family on the walls, there is very little clutter.

Carol lives in Havant, and works for the local council as an electoral registration officer, a job she is very proud to have achieved through hard work and promotion. As she talks about her office and its typical jokes, her face creases with self-conscious smiles. When she meets Eddie, a black man who has had mental health problems and is sleeping rough, in a local park she invites him back to her home. Some 20 years earlier, the two of them had an affair after Carol’s husband left her, but Eddie disappeared one day without explanation. But that’s the kind of guy he is.

The pair in this two-hander offer a nice contrast. She is a pessimistic dogsbody, hard-working but a bit of a plodder, respectable and restrained. She likes Saturday Kitchen on the telly. He is a bit of a dreamer, impractical, unreliable and troubled, working at odd jobs and currently doing some menial recycling shifts at a local depot. He doesn’t see the point of telly. Both are terribly lonely, and their fears and uncertainties radiate from them like a sad smell. They both have no one in the world, although Carol’s daughter Leeane lives and works at a holiday camp in Hayling Island, not so far away.

What unites them both is not only the memory of their brief affair, but also the sense that they are missing out on life. They feel that life has passed them by, not really a bleak experience so much as one of emptiness. They are frightened that life goes on, and, as Carol says at one point, “You get to go on all of the rides just once.” Since it is pretty obvious that Eddie won’t be able to settle down, there’s a tension about what will happen: will he just walk out? Or can they overcome their fears of life and get together? Or will there be a more violent outcome?

Norris shows their interaction with great tenderness and understanding. Moments of miscommunication — “You’re so odd,” says Carol — contrast with small instances of understanding, revelation even. Eddie is sadly damaged, a child of foster parents who has spent years trying to find himself in Nigeria, and now dreams of a job in rewilding, living rough while clutching all of his few possessions in several plastic bags. He doesn’t always tell the truth, and his voice rises almost to passion when he recounts the myth of the Flying Dutchman. Carol’s more grounded, more competent, but equally desperate in her own calm way. At one point, she helps him fill in a form to get more help from the NHS, but we just know that there are not enough resources to treat him.

As directed by Alice Hamilton, for Up in Arms, this is an undemonstrative piece of drama, barely 70 minutes long. Her cast, Andrew French and Tessa Peake-Jones, are so perfect that it’s hard to imagine anyone else playing the parts. French shows how Eddie conceals his confusion by being quite loud and insistent, while Peake-Jones suggests deep wells of pain beneath Carol’s rather placid, and occasionally glowing, exterior. Both are casualties of the brutality of the absence of love, and although the play’s story is quite thin, it is written with enormous compassion and empathy. A great way to open the Bush’s new studio.