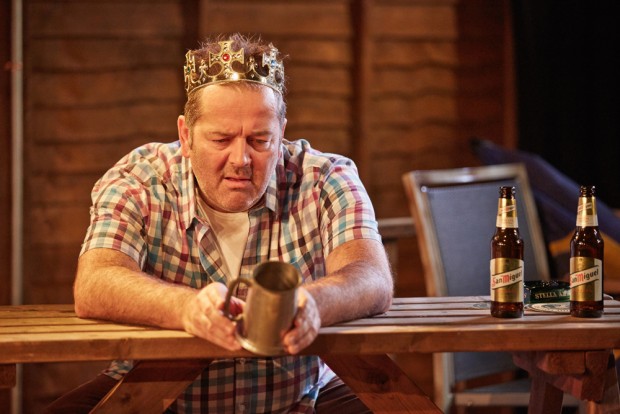 The title speaks volumes. Eventide means the end of the day; it signifies evening, a time when you might want to reflect on events. It has a nice ring; it’s archaic, but evocative of country life, of churches and pubs surrounded by green fields. It is also in, for example, the first line of the hymn “Abide with Me”: “Abide with me; fast falls the eventide.” And it captures perfectly a tone that playwright Barney Norris is rapidly making all his own: it’s a sensibility that is alive to all the things that haven’t happened as well as those that have. And his play is about loss, about disappointment, about absence, and about that very English theme of failure.

Like Norris’s very impressive Visitors, Eventide is produced by his own company, Up in Arms, and fulfills its mission to “make plays about people and the places they’re from”. Using a set, designed by James Perkins, composed of wood decking, an all-weather wooden table, some wooden fencing and a plastic rubbish bin, the back yard of an obscure Hampshire pub — deep in the English countryside, a fair amount of miles from Andover — is immediately established. In this smoking area, the lives of three lonely people are examined.

John is the pub landlord, a man who drinks too much and who acts out a larger-than-life role in his job; he not only pulls pints, but also tells stories and a series of ridiculous jokes (his first speech is one about the ferret which “gives the best blow job in the world”). But his bonhomie conceals a life of sadness. His wife has left him, their divorce has come through and he must sell up the pub to pay her half of their mutual property. The play begins with his last day at work. As he says, “Sometimes all your life feels like a falling away of everything from you, don’t you think?”

It’s a phrase that could also apply to the other two characters: one is Mark, a younger man who works at odd jobs, and who is trying to get over the fact that a young woman, Lucy, who he thought was his best friend even though they were not lovers, has just been killed in car accident. It’s the day of her funeral. The other is Liz, who plays the organ in the local church and has come over to perform at this occasion. Like the other two, her life has been marked with loss and loneliness. So although her first speech is all about smoking and sex, you just know that she is also deeply unhappy.

As the men drink beers and Liz has her lemonade, a sense of yearning develops and we gradually see how all these three lives are connected. During the course of this engrossing and moving story, a year passes and the fortunes of all of them change. Although loneliness and a fear of intimacy are strong themes, there is also a great sense of human resilience — not only the ability to laugh in the face of tragedy, but also the strength to endure whatever life throws at you.

At the same time, this is also a sketch of how country life in England is changing. A brewery chain is buying the pub, and work in this small village — apart from service industries or odd jobs — is virtually non-existent. Very few people farm; very few young people stay put. But, as Mark points out, his reading has taught him not to glamorise or feel nostalgic about the past. “The people who lived here,” he says of bygone times, “were more or less serfs.” It’s certainly not Downton Abbey.

On the other hand, Liz feels a connection to the Englishness of the country church, with its hymns and organ playing, and there are a couple of tender moments when the sound of “Dear Lord and Father of Mankind” and “Abide with Me” feels like a healing balm. Yet even the consolations of religion are denied to these characters. As Liz says, “You don’t have to believe in God to be an Anglican — that’s the whole point.” All that remains is the rituals and practices, empty of a deeper meaning.

This tone of loss, and of fortitude, is sensitively handled by Norris’s Up in Arms collaborator, Alice Hamilton, whose production is exceptionally well put together. James Doherty is on really good form as the landlord whose friendly and attractive exterior conceals a soul that has been lacerated and whose personal failure suggests metaphorically that a way of life is coming to an end. Hasan Dixon plays the younger man as a modest, confused but ultimately hopeful creation. He represents a new generation slowly finding its feet. Last but certainly not least, Ellie Piercy’s Liz is a study in emotional intelligence that puts the male characters to shame. This is a tender and deeply felt elegy, an eventide indeed, for both people and place.