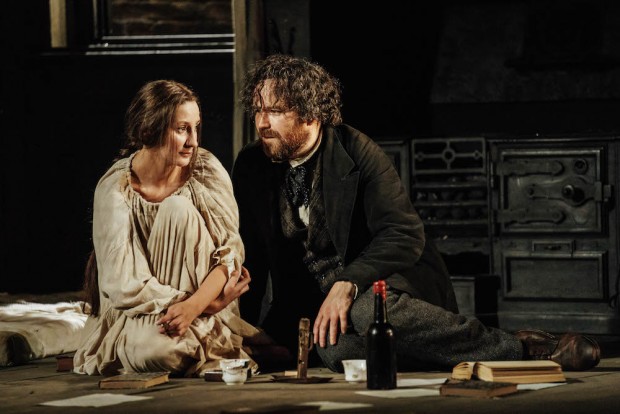 Given the rather uneven record of the National Theatre at the moment, there’s already a certain nostalgia for the days, which came to an end two years ago, when it was run by the two Nicks: Nick Hytner and Nick Starr. Together, they transformed this flagship theatre, offering the world some gloriously entertaining and mega-successful plays, from War Horse to One Man, Two Guvnors. Now at the helm of a brand-new theatre, the Bridge (located next to City Hall on the south side of Tower Bridge), the two Nicks are opening their 900-seat venture with a fresh comedy about a young German migrant, obviously an unemployed sponger and probably a terrorist, who spends his evenings on the piss. Attractively enough, he’s played by Rory Kinnear.

Reuniting the team behind the mega-hit One Man, Two Guvnors (playwright Richard Bean and director Hytner), Young Marx is a neatly ironical way to open a glitteringly contemporary new space in a bright building set among some shining temples of commercialism, with swanky apartments and high-grade offices. A far cry from the impoverished revolutionary critic of all things capitalistic. Billed as the first wholly new large-scale theatre to be added to the capital’s commercial theatre sector since the 1970s and the first to be built outside the West End, Hytner’s artistic project is to stage “bold, popular shows”. So does this opening bid deliver the goods?

Well, the theatre itself is a thing of wonder. It’s light, airy and attractive, and has uncluttered and modern public spaces that mean you can move around easily and find your comfortable seats with no problem. Inside, the large, but flexible, auditorium looks like a modern version of a Georgian theatre, with a horseshoe shape and three layers of galleries offering good sightlines and clear acoustics. The brown and beige colour scheme, the leather and the wood, combine to remind you of Glyndebourne, and the ambience gives off a warm sensation. And, for once, there are dozens of women’s loos.

But if the theatre is great, Young Marx is less than brilliant. Set in 1850, it is a farce about the 32-year-old revolutionary at an early stage in his career. Hounded from the other capitals of Europe, threatened with imprisonment for advocating the fall of the old order, he gets political asylum in comparatively liberal Britain. The play shows his family life, as he lives in complete poverty in Dean Street, in London’s Soho, in a cramped rundown flat. In one room there’s Marx, soon joined by his collaborator Friedrich Engels, Jenny von Westphalen (Marx’s wife and a former countess), their children and Nym, the maid.

Their poverty is starkly outlined when Marx pawns one of Jenny’s heirlooms, and the play begins with a handful of good jokes about pawnbrokers, German refugees and the newly set up police force. Marx, who has to hide in a cupboard from his creditors, comes across as a cowardly wastrel, with a huge ego and a breathtakingly selfish attitude to life. He is also intellectually super-charged, caustically satirical and violently argumentative. Yes, he is a classic 19th-century male “genius”. Jenny is shown to be exasperated, at the end of her tether and about to walk out on him, and Nym is his sexual consolation prize. Both women also participate in Marx and Engels’ political project.

True to history, the German emigré revolutionaries are pictured as a bunch of bitter and twisted no-hopers. Bean, and his co-author Clive Coleman (comedy writer and the BBC’s legal correspondent), vividly create some memorable characters: as well as the larger-than-life Marx and Engels, here amusingly doing an occasional vaudeville double act, there is the arrogant August von Willich, who is in love with Jenny, the crazy French terrorist Emmanuel Barthélemy and the humane doctor, Gert Schmidt. Best of all is Konrad Schramm, the effusive if boring new editor of the new Neue Rheinischer Zeitung.

The main problem with the play is that although a lot happens — political meetings and debates, trouble with the police, visits from bailiffs, a duel, an unexpected pregnancy, an equally unexpected death, the discovery of an informer and a riot in the British Library — the main dramatic conflicts are unfocused and, despite the belly laughs, the story lacks a dynamic momentum. There’s little drive, and little excitement. Okay, there’s a lot of fun, but less sense of purpose or meaning. It’s a play that cries out for simplification.

So, despite some lovely set pieces of eccentricity — Marx meets a bearded gent who is obviously Darwin, Marx analyses German philosophy to the tune of Beethoven’s “Ode to Joy”, Das Kapital is composed by a family committee — the play’s overall effect is underwhelming. Still, Hytner’s brisk production has smooth scene changes thanks to Mark Thompson’s revolving set, which shows a satisfyingly squalid room, in a dark slum, as well as various locations around Soho, and is topped by gloomy smoking chimneys. The effect is pleasingly like one of Gustave Doré’s illustrations of Victorian London.

The always watchable Kinnear plays Marx as three parts vicious parasite to one part noble intellectual, one part needy seducer — with a dash of cuddly teddy bear. He brings out well the revolutionary’s petty squabbling, his drunken irresponsibility and his sense of innate superiority. By contrast, Oliver Chris’s Engels and Nancy Carroll’s Jenny are models of patient restraint, which makes their outbursts of anger the more powerful. Laura Elphinstone’s Nym is often the most intense and emotionally connected person on stage. As a piece of biography, Young Marx is wise, but unexceptional; as a farce, it is fast-moving, but over-complicated.