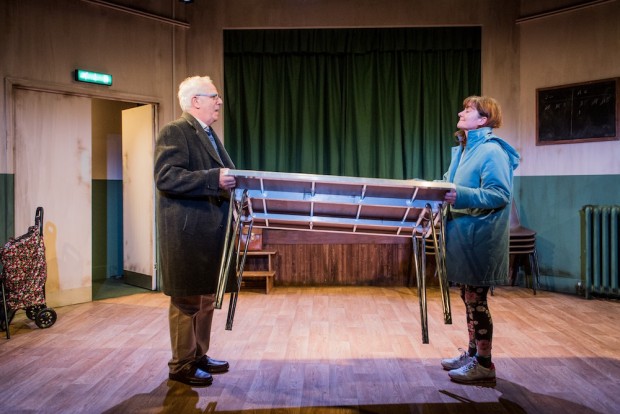 Small is beautiful. And that is because two-handers can sometimes reach parts that other, bigger, plays fail to touch. This is certainly the case with Stewart Pringle’s Trestle, which opens in the studio space of the Southwark Playhouse after winning this year’s Papatango New Writing Prize. Pringle is a writer and journalist who has got an excellent track record in spotting good dramatic material: he used to run the Old Red Lion fringe theatre and is now Associate Dramaturg at the Bush Theatre. He is also a playwright, and his latest play is a small but perfectly formed story that has a delicacy and ability to touch your heart that many larger works can only dream of.

Set in a drab temperance hall in a small Yorkshire village, the plays looks at the relationship of sixty-something Harry, a retired man who is chair of a local committee, and Denise, of a similar age and the leader of a Zumba fitness evening class. They meet at the hall, in the gap between Harry’s packing up of his things — which includes the trestle table that provides a title for the play — and the start of Denise’s Zumba class. Pringle explores their deepening feelings for each other by telling the story exclusively in 20 episodes — all set in this brief time span. Astonishingly, this self-imposed constraint works really well.

Over about 80 minutes, we watch the slow budding of an autumnal love. After some initial awkwardness, when Harry mistakes Denise for the hall’s cleaner, they bond over their sandwiches, and her jokey and more outgoing personality results in him becoming slightly less closed in as a person. He’s widower who keeps himself to himself so the more emotionally intelligent Denise has to prise him open like a tin of sardines. She tells him about her book group, and then challenges him to reconnect with his more physical side, with dance and the body. He invites her to sit in on his committee meeting; eventually, she even invites him to a party.

Of course, this series of micro-events includes some hiccups. Harry takes a while to warm up, and they both discover things they don’t like about each other. Arguments flash and flare; then awkward reconciliations happen. Sometimes they act like teenagers, sometimes like old people who are facing years of loneliness and sadness. You never doubt the reality of their characters. Both want to reach out, but both are equally afraid to get in too close. The emotions begin to build, and halfway through the show there’s plenty of anger, jealousy and then deflation. Pringle is spot-on in his depiction of emotional truth.

A picture emerges of Englishness in all its buttoned-up and gawky uncertainty. Like a jigsaw, dozens of small pieces, often tiny details, are put together to create a completely real impression of two individuals who are facing aging with stoicism, while also being well aware of the sadness of loss, and of absence. What comes across most strongly is Denise’s good nature, and Harry’s defense of traditional community values. If both of them, in different ways, have learnt to deflect painful emotions, they have also realized that no person is an island. As they together put away the trestle table every time they meet, this activity becomes a metaphor for their growing involvement with one another.

Trestle has a convincing text, full of depth and discretion, and its humour is well brought out in Cathal Cleary’s careful and sensitive production. He, and his actors — Gary Lilburn and Connie Walker — do full justice to these two lonesome beings. Lilburn gives Harry a physical and mental stiffness, which is occasionally allowed to thaw, while Walker’s Denise is constantly surprising in her shifts of mood. Frankie Bradshaw’s set, with its green paint, green curtain, neon strip lights, plastic chairs and collapsible trestle table, evokes the cheerlessness of village halls, while Richard Hammarton’s music provides an audio commentary. Towards the end of the play, I felt a great depth of sadness welling up that was robustly moving and touchingly tender. Yes, this really is a lovely play. It may be small, but it’s really beautiful.