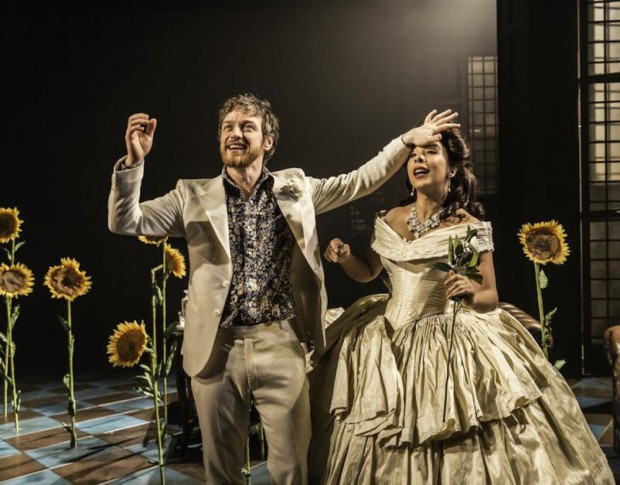 Theatre is a business as well as an art. And the best way of selling tickets is to get a big name. Of course, there are two kinds of big name: big-name playwrights and big-name actors. Both create audience anticipation, which is a great boost to box office whether in the commercial or the subsidised sector. Two big openings in the West End and at the National Theatre (The Hard Problem by Tom Stoppard) exemplify what I mean. At the Trafalgar Studios, Peter Barnes’s The Ruling Class — first staged in 1968 and then made into a memorable film starring blue-eyed boy Peter O’Toole in 1972 — is being revived for the first time, with James McAvoy in the lead.

It’s a long, pretty overblown and rather old-fashioned piece of theatre — but McAvoy is such a big name that the producers will have no trouble selling seats. The story of the play is wonderfully ludicrous. After the accidental asphyxiation of the 13th Earl of Gurney during a perverse sex act, his son Jack — a paranoid-schizophrenic patient in a mental asylum — comes into his inheritance. So the question is: is he sane enough to make the right decisions, or must the other members of the family run his estates?

At first things look pretty crazy. Believing himself to be God on the grounds that “When I pray to Him, I find I’m talking to myself” — and calling himself JC — Jack proclaims the gospel of love, while his uncle, Sir Charles, plans to marry the boy off to the older man’s mistress, Grace, produce an heir, and dump Jack back at the asylum. Helped by Charles’s wife, the family bishop and Tucker — loyal servant but also a Comintern agent (that is, Soviet spy) — the plot bubbles nicely while Dr Herder, in charge of the asylum, has an alternative strategy for curing Jack: confront him with McKyle, the High Voltage Messiah (who is even madder than Jack).

Needless to say, Jack is cured — and becomes a respectable member of the aristocracy. The joke is that normality among the ruling class is even more insane than mental illness. Amazingly enough for a play that was first conceived in the 1960s, a lot of Barnes’s satirical bite remains sharp. The jibes at public schools, Eton, the power of privilege, all serve as a reminder of the composition of our current government. Some things have changed: the unreformed House of Lord is still full of fossils, but is not longer exclusively hereditary. The typical Tory MP is no longer a member of the landed gentry; today’s butlers are unlikely to know the words of “The Red Flag”. There is no death penalty for hanging judges to salivate over.

But perhaps the most dated element of the playwriting is the luxurious fertility of the writing itself. Barnes switches deftly between two tones in his portrayal of Jack: the ecstatic God of Love and the stuttering God of Vengeance. In the first, the detail is gloriously biblical and full of the heritage of English pastoral culture (you can almost detect a direct line that runs from this play to Jez Butterworth’s equally fertile and imaginative Jerusalem); in the second, the mood is darker and more carnal, with the spirit of Jack the Ripper stalking through the action. You can feel the shadow of senseless death creeping up on the characters. The jokes continue, but the laughter is more uncertain.

Barnes’s intense sense of theatricality is on show throughout: the evening is a patchwork of farce, romance, song and dance, satire, wild fun and country house murder mystery. On this stage, Bertolt Brecht rubs shoulders with vaudeville. The mix, in Jamie Lloyd’s bright production, nicely designed by Soutra Gilmour, is immensely entertaining and vivid, even if the story takes ages to tell. McAvoy, who’s on stage for most of the nearly three hours of running time, is excellent in portraying Jack as a troubled lad, complete with leaps, somersaults and crawls, but less good at plugging into his character’s demonic energy. Somehow, he never really feels dangerous on stage. He is, simply put, too nice a guy. Still, he gets good support from Ron Cook, Serena Evans and Joshua McGuire as assorted family members and from a bright Kathryn Drysdale as Grace.