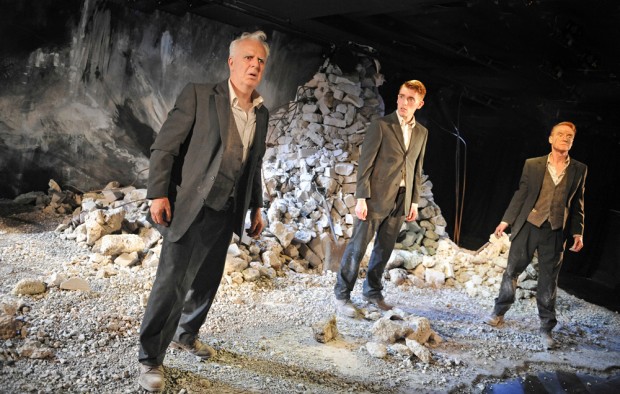 Finding the mythic echoes of the ancient Greeks in stories about the modern world is not just confined to past greats such as TS Eliot, but is also used by contemporary adapters of old tragedies. Yet Colin Teevan’s new play, which shadows the lives of Irish navvies working in England with echoes from Greek tragedy, goes one better. Asked by the director Lucy Pitman Wallace to rewrite the Oedipus myth through the lens of Krapp’s Last Tape, the playwright has come up with The Kingdom.

Teevan’s ambitious idea is to marry stories from the great migrations of Irish workers to England, from the 19th century to the 1970s, with the tragedy of the lame one from ancient Greece. The result is part history reimagined, part classical mythology and part psychological nightmare. The result is a subtle, sinewy and serpentine text that creates a unique world which is both intellectually impressive and, for the average audience member (including me), frankly rather baffling. Sadly, it’s also a bit dramatically inert.

The first problem is that Teevan attempts to retell the Oedipus myth by using just three speakers, three men: one old, one middle-aged and one young. Between them, they share all the characters, from Oedipus to King Laius and Queen Jocasta, from the Sphinx to the blind seer Tiresias. Plus assorted other characters. On the page this is immensely impressive; on stage it is asking a lot. It is difficult to follow. You lose your bearings. Soon I began to feel that I was trapped in a never-ending labyrinth, where dark tunnels only occasionally break into caverns dimly lit by spluttering torches and where the hot breath of the Minotaur might raise the hairs on the back of your neck.

I felt lost, puzzled, and then suddenly dazzled by a passage of exceptional writing. This myth-land is an odd place. Characters have comprehensible names such as Boss Carbery and John Bull, but they are also called Horse, Elephant, Prophet and Angel. In this strange hybrid play the great migrations of Irish workers have a strong contemporary resonance — they are the makers of modern Britain. At the same time, Teevan — who was born in Ireland — paints a picture of Irishness as Diaspora: there is pain, grit and ambition. Exile. And the hardness of the life of the migrant who has nothing to sell but his muscle power is echoed by the hard stones of the barren set.

On this rocky road and building site, designed by Jessica Curtis, the three actors spend the play digging the ground, breaking up rocks and shovelling the pieces into a truck. Digging is also a metaphor for excavating old truths and hidden secrets. As well as rapes and other crimes, there is a tinker’s curse and an ambiance soaked with beliefs about the Holy Virgin. As each actor talks directly to the audience, rather than to the other characters on stage, the narrative loops and loops.

Comprehension is not helped by Pitman Wallace’s production, which gives the three men plenty of hard work to do with shovels and picks, none of it remotely convincing, but all of it effectively distracting. In a dusty, hard environment, the actors do their best with this difficult tale: as the Young Man, Anthony Delaney’s freshness and spirit contrasts well with Owen O’Neill (award-winning one-man performer and adaptor of The Shawshank Redemption) and his passionate intensity. By the end, both men are eclipsed by Gary Lilburn, who achieves a haunting resonance in his final speech. But, even at 70 minutes, this is an intractable and gruelling evening.