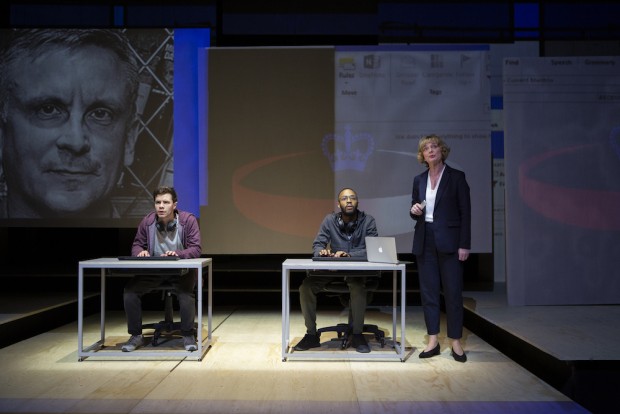 Total surveillance: this is the idea that every moment of our waking existence can be spied upon by the state, or by some foreign country. It’s a paranoid notion based on the huge growth of the digital world, and our fears about the intrusion of power into our daily lives. Recent terrorist incidents in London show, if proof was needed, how ineffective the security agencies are at monitoring known and convicted suspects, and how easily the so-called lone wolves can evade control. But all this is a hot topic so it there is a certain aptness about the fact that Roxana Silbert, the new artistic director of this venue, has chosen a surveillance thriller as the first show to direct on her main stage.

The Haystack is the first full-length play by Al Blyth, who used to work at the Institute of Fiscal Studies before writing short pieces and The Rook, a supernatural spy thriller for television last year (oddly enough his biography reads like a made-up personality: I bet he once worked for the security services). Its plot is a mixture of television shows such as Spooks and The Press: Neil, a computer geek who works for GCHQ, is asked by his boss, Deputy Director Hannah, to investigate, along with his work mate Zef, a leak. In the process, the two young men spy on Cora, a Guardian journalist who is trying to convince her editor, Denise, that Ameera, a divorced Saudi princess, has a good story to tell about that kingdom’s ability to pressurize British politicians. When things go pear-shaped, Cora is sacked and Neil, in defiance of explicit orders, begins a covert relationship with the vulnerable young woman.

This is a play about ideas. The title comes from the phase “needle in a haystack”, the realization that the surveillance state has to monitor the entire population in order to find the relatively few suspect individuals. Those who might commit a terrorist offence. Some of the best passages describe the use computer data by the security services, and show how almost nobody is safe from digital intrusion. As Hannah says, this is justified because “It’s our job to keep this country safe”. Ha. Repeated references to the recent London Bridge terror attacks and other stories about leaks and newspaper reports give an air of credibility to this sense of total snooping. In one respect, however, there’s a contradiction between the image of complete control and the action of the play, in which Neil avoids surveillance during his affair with Cora.

The best scenes are the jokey office lives of the conscientious Neil and the more overtly ambitious Zef, who keeps a Spank Bank of intimate photographs of young women under intrusive surveillance. When Neil and Cora get together there’s an acute psychological tension because he decides to assume a false identity in order to hide what his day job is. The most emotionally interesting scenes are those between the couple, and Blyth’s rather functional writing style takes off as the stakes rise. In terms of plotting, the thriller formula means that there must be twists — and indeed there are. These are effective in the moment, although the more you think about the story the less credible it becomes. Still, the narrative is enjoyable enough to make almost three hours of stage time feel light.

Some of the pleasure of the play derives from the ironies thrown up by the story. The familiar paradox that the more we are connected in the digital age the more lonely we have become is clearly articulated, and our willingness to provide data about our daily lives is also stressed. How can we complain that spooks are watching us if we willingly give internet companies all that info? The senior women in the story, Hannah and Denise (who gets drawn into Neil’s whistleblowing gambit), seem similarly hard and professional, while young Cora behaves rather unrealistically like a brat, and takes to excessive drinking as if she is a cliché incarnate. A female writer might have created a deeper personality. Yet with recent terrorist incidents there’s no denying that this is a timely and relevant drama.

Silbert directs with an engaging mix of video projections, live action and overlapping conversations, while designer Tom Piper creates a sterile office which easily clicks into bars, apartments and leafy parkland. Duncan McLean’s video work conveys some of the nerdy thrills of both video games and computer hacking, while the cast is very good: Oliver Johnston’s socially awkward Neil contrasts nicely with Enyi Okoronkwo’s more laddish Zef, and their relationship is both believable and fun to watch. Rona Morison’s Cora conveys passionate idealism and suicidal despair, and is the emotional heart of the play. As the two powerful women, Sarah Woodward has more of satirical slant to her dialogues as Hannah, compared to Lucy Black’s serious but tamer Denise. If neither newspapers nor intelligence services will lose sleep over the way Blyth represents them, The Haystack is insightful enough to be a contemporary state-of-the-nation parable.