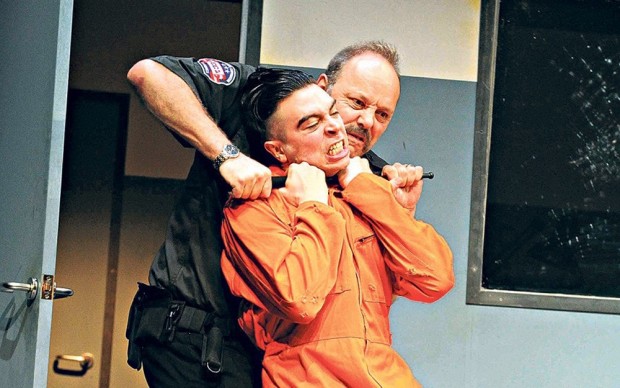 Last Tuesday I watched British writer Richard Vergette’s American Justice, at the Arts Theatre, and found myself in a state penitentiary somewhere in the South of the USA. Lee Fenton is a young man from an impoverished background who has been pardoned for the crime of killing a young woman on the basis that John Daniels, a Democrat politician who is her father, wants to try to educate him. We watch their relationship develop between 2008 and 2016, from the Obama years into an uncertain future, under the ever watchful eye of the slobby warden, Herb Stevens. At first, things seem hopeless. Fenton is illiterate, angry and thuggish. And Daniels is like a missionary, travelling into the dark heart of the American justice system. But gradually the situation changes: Fenton learns to read and discovers the pleasures of education. But is Daniels helping him because he is seeking his redemption, or to alleviate his own sense of guilt about his daughter’s death, or in order to further his own career. When Obama gets a second term, Daniels is appointed Secretary of State for Education. It has to be said straight off that this play is more symbolic than plausible. It’s written as a highly effective psychological thriller in which the two men are engage in a compelling battle of wits. While this is going on, the serious issues emerge: the play explores the links between poorly educated young men and crime, and questions the motives of politicians who attempt to do good. It is also able to spring some surprises. For a long time you feel that this story of forgiveness and redemption is just a straightforward narrative. But towards the end, something much darker happens. Both men turn out to be different from our expectations, and this does make for a very effective contrast and adds an undeniably theatrical thrill to the evening. Lisa Forrell’s tight direction keeps up the interest and the tension. Her cast is excellent: both Peter Tate’s Daniels and Ryan Gage’s Fenton are convincing, and visibly grow during the performance, while David Schaal’s warden lends good support. In a world where the richest country on the planet not only remains awash with guns, but which also executes hundreds of its poorer inhabitants, American Justice is an apposite and gripping drama.