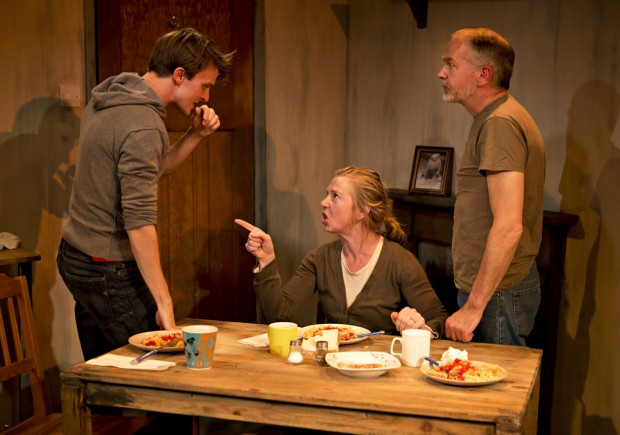 Fringe theatre in London is largely unfunded, yet this do-it-yourself sector has a really good record in discovering and promoting new talent. This debut play by Tim Foley tackles the difficult, often fraught, subject of mental illness, and the family context in which its symptoms are often felt, but in an imaginative and theatrically interesting way. This is definitely not just a journalistic study, nor a simply naturalistic account of a rather taboo subject. This is a very good, emotionally intense, contemporary play.

An English family moves to the countryside in Northern Ireland, somewhere near Derry. In this isolated spot, far from prying eyes, Dad is able to look after Mam, who has had mental problems for many years. Alone with their three beloved dogs, they live a quiet and rather solitary life, interrupted only by complaints from a neighbour, Frances, who blames the dogs for attacks on local sheep. When the couple’s son, Johnny, comes home during a break from uni, the fragile psychological edifice of the whole family begins to crack.

Johnny has problems of his own. Not only has he had an emotionally painful sexual experience, but he also can’t see the family dogs. That’s right: to him, they are invisible. Has he inherited the bipolar mental condition of his mother? Or is his psychological state a result of various childhood traumas? Or both? Johnny’s visual blindness is also a metaphor for how the symptoms of mental illness are often ignored, or normalised through family rituals and repetitive behaviours.

The play’s title refers of course to a phrase from William Shakespeare’s Julius Caesar — “Cry ‘Havoc!’, and let slip the dogs of war” — and Foley develops this imagery by showing how Johnny was humiliated as a child when he appeared in a school version of this play. As a history student, he is now drawn to the idea of Caesar, and we see his internal dialogues with Cleopatra, queen of Egypt, imagining himself as a remarkable person with a great future. It’s a common delusion, but here it has a dangerously intense edge.

Clearly, Johnny is in trouble, and is becoming worrying dependent on webcam sex for his emotional well-being. Whenever he is on stage, the drama is written subjectively from his point of view, and director Tom O’Brien and designer Libby Todd bring this out with evocative use of lighting and music by rock band Divisions. The Dogs of War, with its strong symbolism, which contrasts neatly with the everyday chatter of family life, is a powerful account of a family under extreme stress.

Written as a black comedy, there is much here to relieve the darkness of the situation. Distressing as Mam’s behaviour is, the jokes that punctuate the situation — like joyful barks from the dogs in the yard — help to alleviate the gloom. What stays with you is the ambiguity of Johnny’s mental state and the questions that the drama provokes: if he cannot see the dogs, neither can we — so what is real about our minds and our perceptions?

The emotional truth of the story comes from some well crafted writing, based on good observation, as well as excellent performances by O’Brien’s cast. Maggie O’Brien’s wound up, sharp and unpredictable Mam contrasts well with Paul Stonehouse’s long-suffering Dad, a man whose apparent patience could snap at any moment. Richard Southgate’s Johnny explores the puzzling and painful feelings of mental distress with enormous empathy, while Melanie McHugh lends good support as both Cleopatra and Frances.

As you’d expect from a debut play, Foley does tend to pack a lot into it, and towards the end of the story he has a tendency to explain perhaps too much. I preferred the more ambiguous moments. But this is more than compensated for by the passion of his vision and the intelligence of his writing. Occasionally reminiscent of Martin McDonagh’s The Beauty Queen of Leenane, this is a strong and thought-provoking family drama whose impact stays with you for a long time. Haunting.