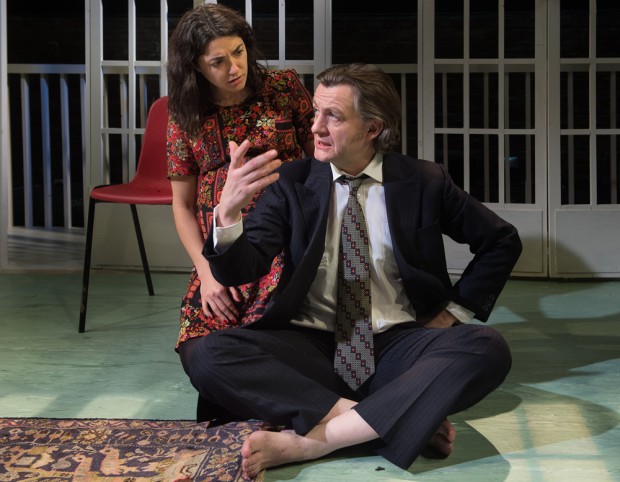 RD “Ronnie” Laing was a typically eccentric 1960s guru. A Scottish psychiatrist who was one of the leading lights of the anti-psychiatry movement, his 1960 classic The Divided Self helped a whole generation to a deeper understanding of mental illness and especially the experience of psychosis. This new drama, by theatre writer and critic Patrick Marmion, is an exploration of an imaginary episode in his life, and is staged on the occasion of the 50th anniversary of the Philadelphia Association, a therapeutic collective which Laing co-founded, and of his experimental asylum at Kingsley Hall in London’s Bromley-by-Bow.

It’s 1970, and Laing and his collective are doing their best to help the troubled and the mad. Instead of using the hammer blows of strong medication, shock treatment and lobotomies, they are trying to listen to their patients, and keep them safe. As well as the loquacious Laing, the therapists include David Cooper (a South African anti-psychiatrist), Aaron Esterson (Laing’s Glaswegian collaborator), Joe Berke (an American therapist) and Mary Barnes (a nurse and former patient). Although their breakthrough method of immersive therapy is radical and has had some good results, they are not very popular with the local community, some of whom are afraid of the presence of mentally sick people in the neighbourhood. So as they face eviction from Kingsley Hall, their problems begin to spiral.

Reason is definitely not helped by a bout of furious drug-taking and alcohol abuse during which Laing (shaman or charlatan?) and Cooper (dickhead or dopehead?) grapple with fantasises of sexuality and spiritual urges. As they get high, Marmion’s play itself takes off and lands on more and more imaginative and mystical planes, with the real conflict between Laing’s anarchic gospel of love and Esterson’s more straight vision of medical care taking centre stage. Then, whoosh, we’re off into more weird and wonderful dreams and memories, with reality bending as Laing’s mother and his imaginary pregnant partner pop into the story.

Since Laing has been vilified and mocked in the past quarter of a century, it’s great to see a play that recaptures the spirit of his project, and shows both his considerable charisma and his radical ideas (many of which sound very reasonable when compared to the drug regimes now routinely used to treat most patients in an era of cutbacks). He was certainly a bit of a hippy, but he was a humane doctor too. Subtitled “The Two Ronnies”, this drama is a comic caper that reminded me of the 1970s plays of Snoo Wilson, with a touch of the wit of Terry Johnson’s Hysteria and a dash of the politics of David Edgar’s Mary Barnes. The passionate discussions reminded me strongly of a time when everything seemed possible, in daily life as much as in psychiatry.

In the second half, Ronnie Laing splits into two people — “This head isn’t big enough for both of us!” — with his alter-ego offering a counterfactual history of the anti-psychiatry movement from 1970 to 2015, as the play time travels to the present! But although the main theme is all about the best way of treating mental illness, Marmion cleverly includes other insights: about Laing’s family life, the conflict between personal affections and public career, and the way that what gurus fear most is betrayal by their closest colleagues. The comparisons with Jesus are neatly underlined. As is the conflict between charismatic leaders and their followers. At the same time, the play’s last 20 minutes meander a bit, as if the playwright can’t quite bear to let go of his characters. And the issue of eviction from Kingsley Hall is dropped soon after its introduction.

Despite this, Michael Kingsbury’s vigorous production has three thoroughly convincing and enjoyable performances from Alan Cox as the mercurial Laing, Oscar Pearce as the irrepressible Cooper and Kevin McMonagle as the more serious Esterson. Good support comes also from Laura-Kate Gordon (Mary), James Russell (Joe) and Amiera Darwish (Ronnie’s partner). This is both a warm tribute to a now under-rated thinker and an evening of fun and insights.