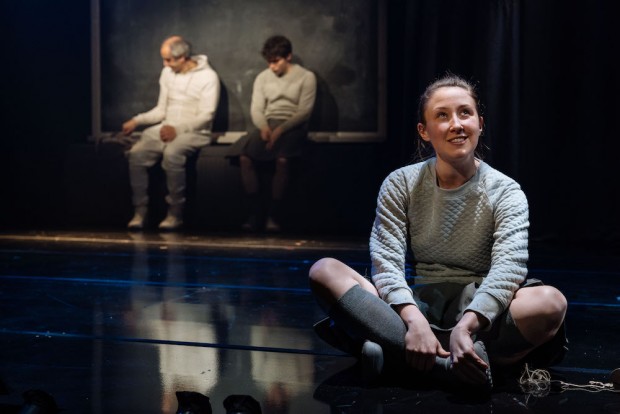 Playwright Alan Ayckbourn basically comes in two flavours: suburban comedies of embarrassment and sci-fi fantasies. His latest, The Divide, which premiered at the Edinburgh International Festival last year in a two-part six-hour version, has been now been trimmed down to a single very long evening for its short stay at the Old Vic in London. Written not as a conventional play, but as a “narrative for voices”, it is a dystopian fable about the relationship between men and women in the aftermath of a terrible plague which has decimated humankind. Think Handmaid’s Tale; but also think Juliet, think Romeo.

After the catastrophic infection, an Old Testament theocracy, led by the Preacher, has been established. Women have been blamed for the contagion and a strict segregation of the sexes has been imposed on everyone who reaches puberty. In each community, men live in the north and women live in the south: the divide of the title. Men wear white, which symbolizes purity, while women wear black, which signals their bad stuff. Populations are maintained by artificial insemination, heterosexual relationships are illegal (and potentially fatal) and same-sex unions have become normal. Into this two-tone world come two star-crossed lovers. Elihu (a boy from a strict religious family) and Giella (a girl from a more liberal background) fall for each other — and bring down the wrath of the community on their heads.

All this is told at inordinate length in a four-hour play by Soween, who is the young teen Elihu’s rather naïve sister, and one of Giella’s classmates. Using the form of a diary, Soween narrates how Giella becomes her best friend, and how at first she doesn’t realise that Giella really just wants to get closer to her brother. In fact, she doesn’t understand much, which is both touching and funny. When she spies on the young lovers, she doesn’t understand that they are making love, but thinks that they are fighting. The diary form allows Soween to build up a detailed picture of life in this religion-dominated future, and the evening starts off with her older self lecturing us about her life story. It’s all very Margaret Atwood.

Since all futuristic dystopias are commentaries on the present, Ayckbourn’s point is not hard to grasp. His vision of a sexual apartheid is an exaggerated view of current tendencies to see women as not only unequal, but in a profound sense responsible for the evil in the world. That this is a medieval religious fantasy does not stop it being contemporary in its effects, with women caricatured as sex-hungry temptation machines, while only men are truly noble. The play is also a warning about the tragic effects of believing government propaganda. The main problem, apart from the huge length and masses of unnecessary detail in this wildly overlong story, is that Ayckbourn writes mainly in a comic key so his dystopia never really feels oppressive or vicious.

Until, that is, the teenage lovers get caught. But the next problem is that Ayckbourn, now freely pinching ideas from Romeo and Juliet, drags out the tragedy of Elihu and Giella for a mind-numbingly long time, and then, having delivered the expected tragic ending, decides to add an equally long conclusion in which the opposite, a happy ending, is manufactured for Soween and the whole of her segregated society. The result is grossly sentimental, with a community choir inflating the on-stage emotions and a grotesque fantasy of political change taking the place of any sensible ending.

Although it’s great to see a teen girl as the centre of the show, it’s hard to be enthusiastic about a story in which heterosexual normality triumphs over single-sex unions. Along the way, there are numerous scenes of teen passion, teen cruelty and teen idealism. The sheer sadism of religious bigotry is denounced, and sometimes humour is used as a debunking device. The tension between progressives (free spirits) and traditionalists is socially relevant, and the joys of temptation are also given an airing. The play likewise argues that youthful desire will always outwit censorious authority (Elihu’s sexuality is awoken by Botticelli’s The Birth of Venus), but also that love hurts. It’s just a pity that it is so traditional in its view of gender roles.

Of course, it is a joy to see the character of Soween hold the stage, as from the age of about nine to 14 she develops her understanding of her own feelings and relationships with other girls. Erin Doherty gives an outstanding performance as the quirky, self-effacing but often humorous Soween, always engaging and often moving in her naïve appeal. And Ayckbourn’s writing has many funny moments, as well as an extensive subplot in which Soween discovers forbidden books such as Jane Eyre and Wüthering Heights (and identifies with the Brontës), but the comedy sits awkwardly with what is essentially a very sad story. Despite the playwright’s best efforts, turning tragedy into a feelgood ending is awkward and unconvincing.

Ayckbourn began writing this story as a novel, and it remains word-heavy with the diary form further padded out with council meeting minutes, court transcripts and medical communications. Amid all this recitation, Annabel Bolton’s production struggles to come alive, although it is helped by Laura Hopkins’s gloomy design and Ash J Woodward’s video projections. Along with Doherty’s delightful performance — made up of sincerity and surprise and sadness — Jake Davies and Weruche Opia are excellent as the young lovers, and so are Thusitha Jayasundera as a strict paternal mother and Richard Katz as an eccentric tutor.

But while it’s great that Ayckbourn, now in his late 70s and having penned more than 80 plays, is still able to conceive a story of such sweep and grandeur, the narrative could easily have been trimmed even more and it is rather puzzling that this massively overblown enterprise is playing for less than two weeks at this venue, which suggests that the Old Vic — co-producers with the Edinburgh International Festival — has very little faith in its appeal. And who am I to disagree with them?