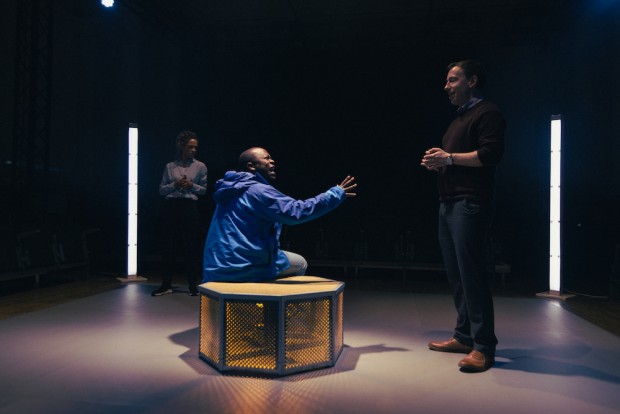 Your story. Our story. Their story. Just imagine: you’re a political refugee, and, having experienced horrible things that happened to your family, you finally, after a lot of trouble, arrive in a foreign country. You request political asylum. You are asked to tell your story. You try, but the people who should be listening are not listening. They are not doing their job. They are too busy talking. This is the nightmarish situation explored by Tim Cowbury in his quietly chilling new play, which was developed with the help of migrant organizations and first toured the country in 2017. It now returns to Shoreditch Town Hall after a successful run at last year’s Edinburgh Fringe Festival in a Paines Plough production.

The set up is stark in its simplicity: Serge is a young Congolese man who, after an atrocity committed by a militia in his home, has fled to Uganda and spent a number of years there. Arriving on a tourist visa in the UK, he eventually finds work and lives in Streatham, south London. When he finally decides to seek the legal status of political asylum, he has to attend a Home Office interview. Two British functionaries, male A and female B, are tasked with his application. But there is a problem: Serge speaks French, and has quite limited English. A can speak French but his senior colleague, B, cannot. The stage is set for misunderstandings.

But this is not a documentary: Cowbury adopts a gentle, but strongly insistent writing style that shows how every attempt by Serge to tell his story is interrupted, or misunderstood, sometimes almost willfully, by his interlocutors. In fact, as is typical of office situations, A and B are initially more preoccupied by their own relationships — A would like to invite B for a holiday on the Greek island of Ios — than by the requirement to do their jobs. The playwright’s satire on the immigration system gradually gets fiercer as Serge, who has also used the name Sese, becomes increasingly desperate to make himself heard while B’s interrogation becomes more and more aggressive. Hostile. The brilliance of Cowbury’s writing is that it strongly conveys feelings of frustration and unfairness without ever lecturing the audience.

Clearly, any play that has this experiential core is slightly reminiscent of Franz Kafka, patron saint of all criticisms of bureaucracy, and the most obvious theatre antecedents are the absurdist playwrights. However, Cowbury keeps the absurd element of this drama under firm control, and the 70-minute play is quite realistic in its depiction of both the desperation of the asylum seeker, who loses his identity as his story is unheard, and the complacency and patronizing attitudes of the two Brits. The fact that B is played by an actor from a diverse background only serves to strengthen the latent ironies of the situation. Yes, this is a compelling account of the clash between “us” and “them”, the others. In the era of Brexit, and the government’s new immigration proposals, this feels suddenly even more relevant.

The Claim is also a play about how language can, in the best modernist tradition, betray as well as communicate. Early on, A says that B is his partner (meaning colleague), but this word suggests his subconscious desire for her to be his lover, while Serge has a good laugh when A’s imperfect command of French leads him to talk about incontinent (he means intercontinental) travelers. Both men are also at cross purposes because A, however friendly, is entirely self-centered. When Serge mentions his childhood love of Willy Wonka and the 1964 Roald Dahl novel Charlie and the Chocolate Factory, A ignores this in favour of telling the other about his own admiration of a cartoon version of Jules Verne’s Around the World in Eighty Days. The humour of such misunderstandings turns sour when Serge talks about hiding “gum” as a child and the Brits interpret this to mean “gun”.

Nor are the two officials as fair-minded and tolerant as the Brits like to see themselves. B, for example, is openly skeptical of Serge’s story, even while he is unable to tell it clearly, and because of her poor language skills she has to depend on A’s unreliable translations. She wants his application to fail. At the same time, the stories that A and B tell each other about their lives are exposed as only partially truthful, and both these anecdotes are based on suspicion, or hostility, to the other. Needless to say, both A and B believe that they are being generous, tolerant and good. Yet their combined effect on Serge is cumulatively devastating. His story is never fully heard. At the same time, Cowbury introduces a meta-theatrical element which stresses that in these kinds of encounters both the claimant and the officials are each playing a part, acting.

Director Mark Maugham’s superb production takes place in the round on Emma Bailey’s intelligently lit bare stage, with its central seat that all the characters spend most of the time avoiding with deliberate awkwardness (sitting suggests surrender). All three actors are completely convincing — Tonderai Munyevu (Serge), Nick Blakeley (A) and Indra Ové (B) — as they interact with audience members, talking to us, staring at us, making sure that we know it’s our complacency being questioned, and both Blakeley and Ove do a great job in embodying a thoroughly British sense of disparagement and triviality. As the asylum seeker, Munyevu is both serious and increasingly flustered as he sees his hopes for a better life going down the drain. Great play, great revival.