The Charity That Began at Home, Orange Tree Theatre 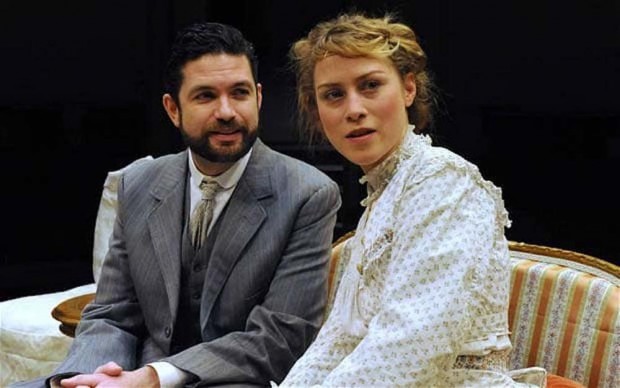 Exaggeration pushed to the limits of sanity makes for good farce, and good comedy. This idea of logic shoved to the edge of reason is exemplified by two revivals that both have a seasonal light touch, but at the same time also display a bit of a satirical bite. At the Old Vic Michael Frayn’s 1982 farce, Noises Off, is a big laugh while St John Hankin’s 1906 comedy The Charity That Began at Home — staged at the Orange Tree Theatre where artistic director Sam Walters specializes in exploring the forgotten corners of the repertoire — has a critical edge.

Compared to the much-revived Noises Off, The Charity That Began at Home is a far less familiar piece, written by St John Hankin, who was an Edwardian playwright in the era of George Bernard Shaw and Harley Granville Barker. Now largely forgotten, but championed by the ever-resourceful Walters, this piece is an interesting satire on sanctimonious do-gooding.

Set in the country house of the landed gentry, the play focuses on Lady Denison and her daughter Margery, who both have been convinced by Basil, a non-conformist preacher, that true hospitality involves not inviting your friends to stay, but instead asking folk who are either boring or unpleasant, or both. This self-sacrifice is the mark of true charity.

So their guests for a house party include Hugh Verreker, an attractive young man who has a scandalous past, General Bonsor, a prize bore, Mrs Horrocks, a vulgarian, and Miss Triggs, a teacher of German. Because the hospitality of their hosts extends to employing unsuitable but needy individuals as servants, there is plenty of scope for bad behaviour and social comedy. Likewise, it is a joy to watch how the best laid plans of Basil, founder of the Church of Humanity, and his most recent converts, run into the sands of human nature and our proven propensity for bad behaviour.

Much of the drama comes from Verreker’s critical approach to social convention, and from Lady Denison’s sister-in-law, who can’t comprehend the sudden conversion of the household to this new ideology. Director Auriol Smith’s excellent production brings out both the comedy and the critical edge of the piece, which also discovers in Verreker an example of the self-sacrificing Englishman, a stage type that was to become common in the plays of Terence Rattigan later in the 20th century. In order to behave really morally, a man has to play the part of a mocking jester before giving up his love life.

At their best, the cast deliver excellent performances. Paula Stockbridge and Olivia Morgan as Lady Denison and her daughter are just right, while Oliver Gomm as Verreker and Damien Matthews as Basil are simultaneously ambiguous and compelling to watch. In the comic roles, Philip York, Rosemary Smith, and Shuna Snow are delightfully amusing, and Rebecca Saire as Lady Denison’s sister-in-law is pleasingly provocative.

Hankin’s play is well-constructed and argues its case with precision and humanity. It illustrates how any ideology, and especially those religious ideas that preach charity as the be-all and end-all of life, is doomed to failure because they take no account of human nature. At the same time, he wickedly suggests that human nature is not a given, but is created by us, through our own actions. This spirited revival is a real rediscovery.