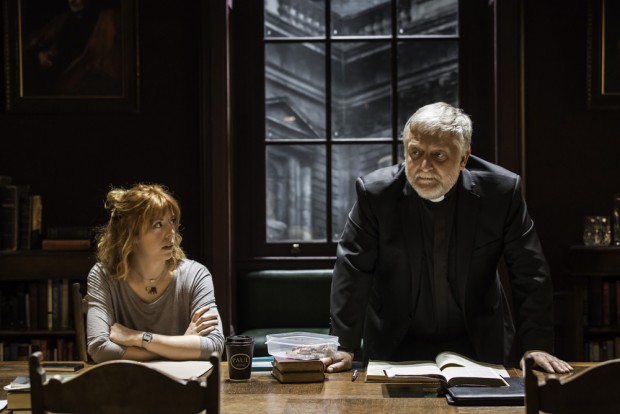 St Paul’s Cathedral is an icon of national identity. Yes, one of those. The building, Wren’s masterpiece, that rose up from the fire and smoke of the Blitz has also seen the funeral of Winston Churchill in 1965 and the royal wedding of Prince Charles and Di some twenty years later. In October 2011, this temple of God found that the Occupy anti-capitalist movement had set up camp outside its monumental front steps. Now, in Steve Waters’s new fictional account of this episode, the Cathedral looms in the background, a silent witness to both the protest and the reaction to it of the Dean of St Paul’s, played by the ever-watchable Simon Russell Beale.

In a panelled room, designed by Tim Hatley, that’s heavy with oak — with the sounds of the chanting Occupy protestors wafting up from the square outside — the Dean prepares to face the press and the public. The previous night, the ruling Chapter of the Cathedral has met to consider whether to reopen the building, which has been closed (an unprecedented move) for two weeks because of fears that the protestors pose a risk to normal visitors, and how to deal with the demonstrators. Should they tolerate them, or evict them?

As the troubled Dean prepares to celebrate midday mass, and scrambles about trying to find a suitable topic for his sermon, he is visited by the Bishop of London (who is seeking a face-saving political solution), by a high-flying female lawyer from the Corporation of London (who says her client will be proceeding with the eviction), and by both his youthful Canon Chancellor and his aged Verger. The Canon, who is a passionate leftwing clergyman, has decided to resign, and appals the Dean by tweeting his decision to the whole world. Meanwhile, the Verger is also unhappy about how the building is being run.

Like other religious believers before him, the Dean must reconcile the competing claims of God and Caesar. In his conscience, he struggles to see how his rather withdrawn attitude to faith can help him in this very public confrontation. These ecclesiastical wrangles could be pretty dry stuff, full of antiquarian detail about the history of St Paul’s and theological detail about St Simon and St Jude, but Waters sugars the pill by introducing the Dean’s new young PA, a temporary replacement for an older woman. She is a gently humorous comic creation, who acts like a guide to the events as well as providing her very own take on them.

Waters’s other characters are equally well drawn: the Canon positively throbs with ardour and passionately states the leftwing case; the Bishop is more Machiavellian in his role as a fixer; while the hapless Verger has scruples about the health and safety repercussions of reopening the church. Above all stands the Dean, a man caught in the eye of a storm he neither foresaw nor wished for. Like a Shakespearean figure, he is beset by doubt and crippled by his experiences, unable to be sure of the right course. Although he wants to follow the normal procedure of unanimity in collective decsion-making, his peace of mind is undermined by the Canon’s resignation.

With his white hair and prickly beard, Beale plays him like an accidental Canute, trying to control the uncontrollable. It is always a pleasure to watch this actor, whose every gesture comes from his sympathetic understanding of character. There is nothing forced, nothing untrue, in this study of bewilderment, self-doubt and self-irony. Essentially alone, he is a man who prefers to keep other people at arm’s length. When another character embraces him, he radiates discomfort. At the same time, Beale also symbolises a particularly English kind of clergyman, quiet, unassuming and unchallenging. The comedy is pretty English too: when the Bishop enters and finds the Dean on his knees, he asks, “Are you unwell?” “I was praying” is the testy reply.

Waters’s writes with an amusing and ironic touch. Although the central theme of the play could be summarised by the serious question, asked by the protestors, “What would Jesus do?”, the tone of the play is self-deprecatory and quietly amusing. There are running jokes about styles of coffee, ecclesiastical ring tones — and there’s a love of linguistic games. The clerics have an attraction to Italianate language forms, preferring dromedary to camel, and micturate to piss. The problem is that Waters is too clever and too subtle for his own good: most of the drama of this story has already happened before Temple starts, and there is no really satisfying climax. It feels as if much more is happening inside the heads of the characters than between them.

Still, Howard Davies’s meticulous and beautifully crafted production emphasises the gentle humour and running jokes of the story in an intelligent evening full of good humour, and all of the acting is first class. Paul Higgins (Canon) and Malcolm Sinclair (Bishop) are both outstanding, with comic relief provided by Rebecca Humphries (PA), while Anna Calder-Marshall (Verger) and Shereen Martin (Lawyer) lend solid support. If you can pardon the overall weakness of the drama then it’s hard to resist the temptation of seeing this play.