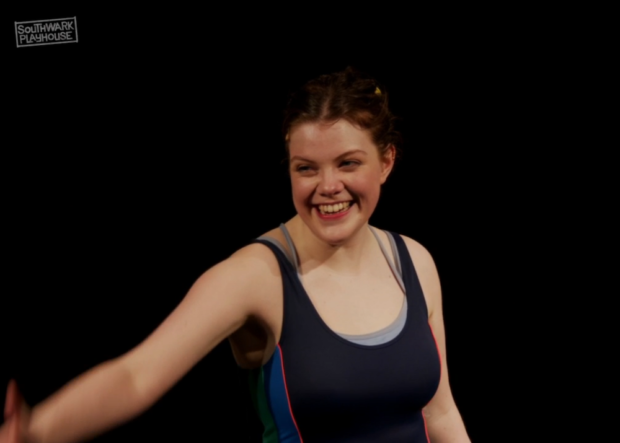 I think I can safely say that polymath playwright Philip Ridley has had a good lockdown. In March last year, when The Beast of Blue Yonder, his new show for Southwark Playhouse, was closed due to the pandemic, he came up with a celebratory idea called The Beast Will Rise, and wrote a new monologue for each cast member to be performed and streamed each week. These number 14 in all, and vary from River (two minutes in length) to Eclipse (almost an hour). Then he wrote The Poltergeist, a fantastic one-man show which streamed in November. Now he returns again to this venue with Tarantula, a new monologue performed by Georgie Henley, The Chronicles of Narnia star who made her stage debut in Ridley’s Angry in 2017.

Henley returns to the Southwark’s Little space to play Toni, a bright East London teenager who reads a lot of books, but has had little experience of love. Or sex. With a deft attention to the detail of everyday life, Ridley sketches out her home situation, introducing her parents, especially Mum who works in an optician’s, and Toni’s siblings, her brother Maz, who’s two years older, and baby Rochelle. Toni likes to please and when she volunteers to help with a school event for older residents, she meets Fern, the caterer, and her teenage son, Michael. After some realistically awkward chat, the two young ones go out on a date.

Ridley beautifully portrays the thoughts and feelings of the gauche but warmhearted Toni and the responses of the gruffer, yet equally tender-hearted Michael. But, partly because this play has a sinister title — which refers to a local bad boy’s tattooed neck — and partly because sweet teen love doesn’t by itself make good drama, you just know that something bad is going to happen. And it does. In the aftermath of this expected, but fiercely well timed and thoroughly shocking trauma, the monologue takes a completely unpredictable direction. Suffice to say that Toni’s story is one that travels from puppy love to various shades of fear, guilt and denial, exploring both the darkness of violence and the sexual fluidity of youth.

Ridley the master storyteller is in his element here, with each episode, however unexpected, being psychologically and emotionally truthful. His writing precisely pins down the shifts of Toni’s feelings — and gives ample room for all the other characters that appear in her story, from her lovers and family to the older generation. He carefully shifts your point of view, showing how trauma can result in our desire to repeat our experiences, even if this leads to regrets, and how denial can lead to telling lies about our lives. It also illustrates how events can change our personalities and our outlook and aspirations. The sheer confidence of the narrative means that the digressions and side alleys of the story effectively create tension and become as absorbing as the central tale.

Tarantula is beautifully written, and the 100-minute monologue shows off the two sides of Ridley’s imagination: his delight in representing, and empathy with, the hormonal storms and awkwardness of teenage life, as well as the exploration of mental and emotional darkness. Casually, he also reminds us of the grim effects of shocking acts of viciousness, the fear of reporting crimes to the police, and the social issues that come from the tensions between the comfortable and the poor. Along the way, there is avian and insect imagery, references to the power of photography and a real delight in ballroom dancing (I hadn’t expected that!). And, just off camera, the highs and lows of parenting.

The title of the play suggests a threatening insect whose very name calls up pictures of hairy hugeness and a science fiction horror. The image of an over-size arachnid scampering about also feels like a metaphor for the play’s form, which darts about in a way that is discomforting, and whose twists and turns are occasionally delightful, but can also make you nervous. Very nervous. At various points, I was forced to ask myself: where is all this going? But I was never disappointed. True to form, the playwright delivers these jolts and shocks without the help of any literal spider. He spins his narrative web with all the patience and skill of a consummate artist.

This, the second premiere of a Ridley play to be live streamed from this venue, is directed by Wiebke Green, and features Henley giving the performance of a lifetime on a bare black stage. She brilliantly undertakes the journey from gauche teen to trauma victim, and then beyond, with a confidence and conviction that is compelling, and occasionally genuinely creepy. At one point she gives a sparrowhawk call that chills the blood. Whether as clumsy innocent or experienced youth, she can both evoke the tenderness of hand-holding love and the sheer screaming terror of shock. She powerfully evokes the feeling of being trapped in a metaphorical web of twisted storytelling. Yes, this is a thrilling addition to the Ridley canon — and a superb piece of new writing.