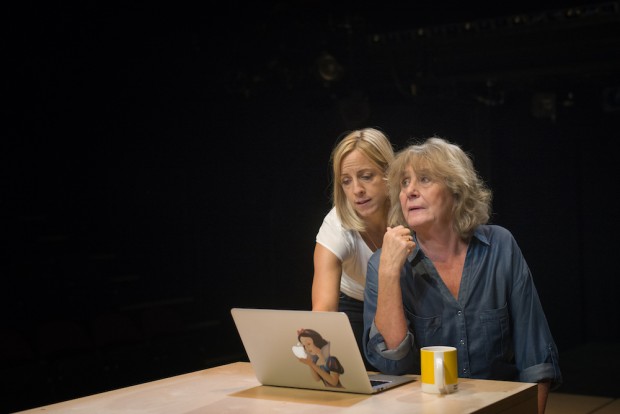 In 2017, playwright Nina Raine’s Consent, an excellent National Theatre play about lawyers and rape victims, was hugely successful, winning a West End transfer, as well as generating a lot of discussion about gender politics. Her follow up, Stories, may be less controversial, but it boldly tackles a similarly sensitive issue: fertility. More specifically, as the publicity states, the drama asks the question: how do you have a baby when you’re 39 and single? Starring Claudie Blakley, the play explores this idea with enormous intelligence and warmhearted sympathy.

Anna (Blakley) is a white middle-class metropolitan professional who is almost 40, and who really wants to have a baby. Her original plan, to have a child with her much younger boyfriend Tom, has run into the sands, shipwrecked by his inability to commit. So she begins a search for a surrogate father, a sperm donor who may, or may not, want to be a hands-on dad. As she pops the question to one acquaintance after another, we see a gallery of culture workers — writers, directors, actors and DJs — both gay and straight, and see how they squirm. Some are friendly; some surprised; some worried. In the end, Anna goes online, but then changes her mind yet again. Sure, the course of true conception in older women never did run smooth.

Given the rather random nature of falling pregnant, Raine has chosen to give shape to the many vagaries that arise when spermatozoa encounter, or fail to meet, a suitable egg by creating a series of amusing stories about Anna encountering, or failing to meet, a series of potentially suitable men. As these dialogues, which take place in a play that is non-linear and fractured in overall form, take place, Raine slips in some casual meditations about the role of narratives in shaping our sense of reality, of giving pattern and meaning to the chaos of life. In some scenes, this might take the form of a throwaway line; in others, such as the repeated scene when Anna tells a bedtime story to her friend Beth’s young child, the metaphor is more overt, more complicated and sometimes more amusing.

As ever, Raine’s writing is pleasingly sharp, emotionally well grounded and brightly observant, as well as often hilarious and bouncing with ideas. The practicalities and ethics of sperm donation and single motherhood are covered, and the failings of a series of unsuitable men are parodied. Fatherhood is both taken seriously, and joked about. The satire of masculine ineptitude is delightful, if a bit repetitive, and in general the jokes work better than the melancholy. Every plot twist is a nice surprise, and there’s a marvelous freshness about many of the scenes. At the same time, some of the writing is unnecessarily declamatory, too obviously making a point.

This is one of those plays that end with members of the audience sharing their own experiences on the way out of the theatre. It suggests something about the complexity of contemporary families, and despite its light touch, its account of the importance of storytelling is quite thoughtful. At one point Raine shows us that telling yourself a story about your life can be a way of solidifying a bad decision, and more cosmically how the absence of God might mean that personal narratives are the only way of giving meaning to a random universe. Amid the comedy, there are some serious insights into the experience of kids who struggle to accept that they have an anonymous sperm donor for a father.

Apart from the laughs, the most emotionally satisfying scenes are the two episodes in which Anna has a heart-to-heart with her mother, and the one about her conflict with her older friend Julie, who is not over-enthusiastic about Anna’s suggestion that her, Julie’s, boyfriend should be a donor. Although such scenes are smartly written, there’s a feeling of fairy tale wonder that hangs over the whole play, which might not be to everyone’s taste. Anna is on stage for the whole show, and Blakley’s performance is superb, often being a different personality in each scene, proving that identity morphs when different exigencies arise. If there is not enough drama in her story to completely repay our interest, Blakley’s Anna remains a thoroughly sympathetic character.

Raine directs Stories as a fast-moving comedy, on Jeremy Herbert’s open and versatile set, which evokes middle-class professional life with minimum props. Her cast are minor masters of virtuosity: Sam Troughton plays all the prospective men with hilarious variety, while Brian Vernel is Anna’s brother and some other younger men. As Beth and Julie, Thusitha Jayasundera is excellent and Margot Leicester feelingly embodies Anna’s mother as well as another mother-figure character. All this makes for an enjoyable, if slightly shallow, evening that has a brilliant form and some great lines. What a lovely issue-based play.