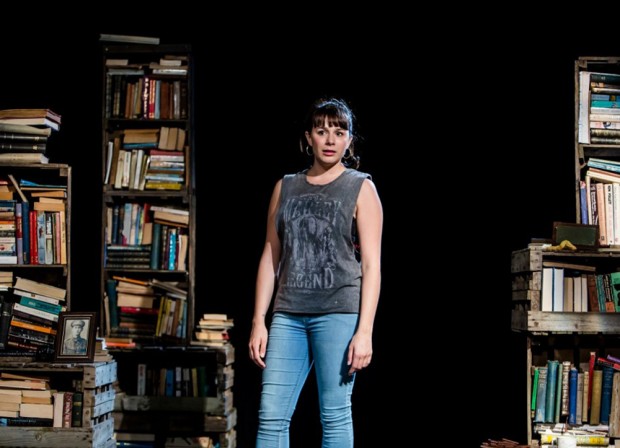 Small can be beautiful. Small casts and small theatre spaces are potentially a crucible for the most intense and sensational shows, and small stories can grow imaginatively into large statements about humanity. One recent show, whose size and emotional truthfulness is typical of much new writing at the moment, illustrates the proposition that you don’t have to fill a massive stage with a huge cast of actors in order to create a whole new world.

Spine, a monologue written by Clara Brennan and first seen at Edinburgh earlier this year, tells the story of Amy, a Willesden teenager whose frustrations result in poor performance at school and conflict at home. Her petty-criminal semi-detached boyfriend, Swanny, is also bad news, and it looks like her life is about to go down the drain. Having met him through her best mate Faye, and after telling us that he “sent her pictures of his knob”, she finally loses her virginity to him, and falls under his spell (while being hilariously aware of his grossness). But then Amy meets Glenda, a pensioner who’s a socialist and who offers her a room in her rambling old house.

This house is a third character in the story, being a make-shift library stuffed with books that Glenda has saved from a local library, which was being closed down by the council due to funding cuts. In Alison Neighbour’s simple design, the books live and breath in the same space as the two women. Then Glenda encourages Amy to read some of them. At first, the relationship between the mouthy Amy, all street attitude and senseless aggression, and the frail Glenda, old-fashioned and physically unable to get up the stairs, is a bit fraught, but gradually it blossoms in this vigorously written and passionately felt play. Its central situation of a rapport between two working-class women that manages, against the odds, to cross the generational divide is striking, and original. However cynical we might be, it feels real and alive.

So Spine is both a strong account of female friendship and a political play about the need for free access to knowledge. For if local libraries are being closed down because they don’t fit into the market economy that is the current ruling ideology of our society, how are the poorer members of the community meant to find out what’s going on? Free access to knowledge — here defined as literature, sociology, politics, economics, history (the lot!) — is as much part of education as school, and as much part of the welfare state as a free health service. So while we remain proud of, and worried about, the state of the National Health Service, why are we not equally vigorous in our defence of our libraries? And why have we let the government get away with all of their cuts?

With the character of Glenda, Brennan eases the audience into remembering our own history: she describes how her husband returned from the second world war and how the Labour government of 1945 set up the NHS and Welfare State. But when Labour lets them down, she doesn’t despair. Instead she advocates a DIY politics — start your own party. Glenda’s position is clear: “You kids wanna be more angry than you are; no one to vote for? DIY it, my gel!” In this way, Brennan’s slender but energetic play expresses anger at the waste of young people’s lives, and refutes the easy option of apathy, a point that is allied to some warmly self-deprecating writing — preachy it’s not. It has to be said that, as well as being right on, this short evening is very funny, and the story’s feminist heart is visible at all times. As directed by Bethany Pitts, and stunningly performed by Rosie Wyatt, it is also an thoroughly moving experience.