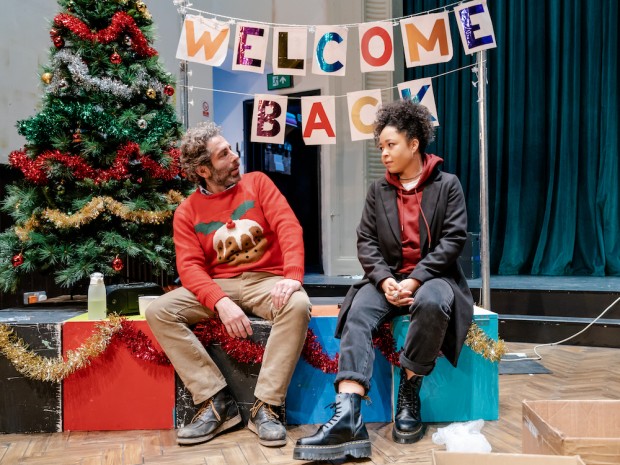 The prolific Mike Bartlett — from whose pen have leapt television series such as Doctor Foster and Press, as well as stage hits such as King Charles III — has two things to celebrate tonight. On ITV his new three-part psychological drama, Sticks and Stones, begins, and this is also the opening night of his new play at the Kiln. Originally staged in Oxford a year ago, its title, Snowflake, alludes both to the old idea of a white Christmas and to the current derogatory sneer about young people being too fragile to cope with the heat of life.

Set on Christmas Eve, in what looks like a draughty church hall in an Oxfordshire village, the play opens with Andy, a 48-year-old, waiting for his estranged daughter, Maya, to visit. In a long 30-minute monologue, which is not exactly a very subtle theatrical device, he tells us about himself, about how his wife died five years previously and how he hasn’t seen Maya for three years. Judging by the decorations and “Welcome Back” banner that he has put up, he is trying to make an effort. Perhaps, trying a bit too hard. Clearly, he wants to see Maya again. Equally, when he chats about Terry and June and Esther Rantzen, he comes across as a bloke who is stuck in the past. I almost couldn’t wait for another character to arrive.

When she does, it’s a surprise. It’s not Maya but Natalie, an articulate and sassy stage presence. After the endurance test of an unnecessary interval, the story resumes with Andy, for whom we might grudgingly feel some sympathy (having been manipulated into listening to his monologue), confronting the younger generation, the so-called Snowflakes. Both Natalie and Maya are in their early 20s, and being at university has given them the chance to hang out with other young radicals who also want to change the world. But becoming a political activist, as Maya has painfully discovered, is not easy if you feel, in Philip Larkin’s words, that “they fuck you up, your mum and dad”.

So Maya brings her hang-ups back home. Generational conflict has previously been an aspect of other Bartlett plays, such as Earthquakes in London and Love, Love, Love, but here it is much more explicit and grounded in a mix of political points and personal psychology. His ability to write angry male leads comes across as Andy becomes increasingly exasperated with the two young women. As he gets hysterical, they grow much more rational, even therapeutic. But while there is a lot to argue about — Dad voted Leave and daughter is Remain — somehow the conflicts simply simmer rather than explode. The plotting is predictable, and the dialogues awkwardly stagey.

In fact, there is a very clumsy feel to Bartlett’s writing, which always seems to be drawn irresistibly towards the preposterous. There’s nothing very imaginative, nor emotionally deep here, and although there are a handful of good jokes (great barbs about sexism and racism), humour can only sustain you so far. In fact, I had almost given up on this two-hour trudge when, in the final half-hour, the piece finally catches fire, and I could feel the scalding heat of true feeling radiating off the stage. At last. Suddenly, you really empathise with all three characters equally — and there’s even a seasonal sense of healing to help sustain you in the rainy night outside.

As a vision of the contemporary, Snowflake will only surprise anyone who has not been out recently. It represents a conflict between greyhairs who think James Bond is okay, even if enjoyed ironically, and youngsters who really think the old world is gone and has to be remade. Bartlett does not get bogged down in categories such as Political Correctness or whether anyone is woke or not; instead, his examples have an inescapable clarity: at one point Natalie humorously condemns Andy’s interest in a book about The X-Files as racist: “Two white people scared of aliens.” Later, she insists that everything from Ladettes, NME, Cool Britannia to Nokia phones and CDs is old world: “Cos all this stuff, it’s gone.” It is indeed.

The joys of Clare Lizzimore’s production, on Jeremy Herbert’s too boringly naturalistic set with its Christmas tree and lights (yawn), is mainly constrained by Bartlett’s rather sketchy writing, but does deliver in its last burning minutes. As Andy, complete with Xmas pudding jumper, Elliot Levey begins as a nervy father, hands fiddling in his pockets, and slowly grows into his own angry self, verbose and domineering (especially keen on putting down young women). It’s a very strong performance and matched by similarly good work from Amber James as the bright Natalie and Ellen Robertson as the hurting Maya. For all its clumsy features, Snowflake might end up unfreezing your heart.