Skin a Cat, The Bunker Theatre 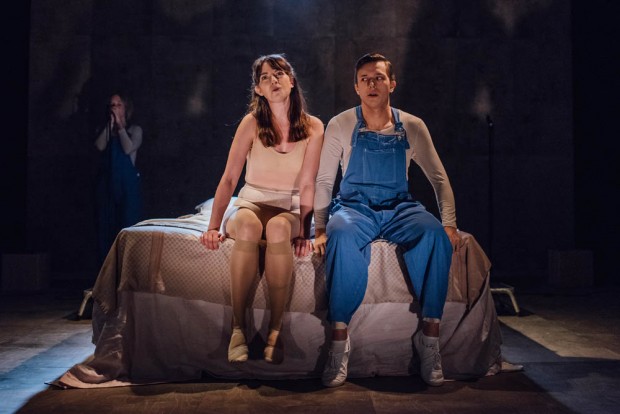 Two of my current theatre pleasures are: seeing work that makes my toes curl in excruciating embarrassment; and visiting a new London venue for the first time. So I was able to doubly enjoy Isley Lynn’s Skin a Cat, first seen at Waterloo’s Vaults Theatre in January, in the depths of The Bunker, South London’s newest theatre, a newly converted car park right next door to the Menier Chocolate Factory. It’s this venue’s opening show, a semi-autobiographical account of one young woman’s discovery of sex and shame, but also of love and understanding.

From the start, when nine-year-old Alana has her first period unexpectedly while on holiday with her mum, Lynn tells the story with a bracing mix of hilarity and truth. As the central character grows into a teenager, the normal anxieties embrace her experience: is she abnormal because she isn’t having sex, when is it the right time to lose your virginity, and why is sex so painful? After a couple of excruciating incidents it becomes clear that Alana is prone to vaginismus, a common but rarely discussed condition which involves, to quote NHS England, “recurrent or persistent involuntary tightening of muscles around the vagina whenever penetration is attempted”. In other words, very painful sex.

Alana’s attempts to lose her virginity become increasingly fraught, and her emotional trauma about her body, about her image of herself and her capacity to love leads to an increasing feeling of deep isolation. She begins to question if she is normal, and then starts avoiding intimate situations. Instead, she throws herself into her university work. So amid the laughs, the cringing details and the unbridled honesty, there’s also a lot of sadness just under the surface of this comedy. At the same time, some passages sound like a medical or sex-education handbook, and there’s a rather didactic, campaigning edge to the whole evening. There’s nothing wrong with that, but it does compromise the playwriting a bit.

Although lacking in drama, except in the scenes when Alana argues with her mother, the story has a positive and even redemptive quality that is warm and affecting. In director Blythe Stewart and designer Holly Pigott’s engaging and heartfelt 85-minute production, with its bare stage dominated by a large unmade double bed, Lydia Larson plays Alana with both appealing frankness and considerable charm. And she gets great support too from Jessica Clark and Jassa Ahluwalia, who play all the men and women in her life. If Lynn’s portrait of Alana’s mother is rather perfunctory and superficial, this is more than just a single-issue play. At its centre is a ragged cry against the worst excesses of a sexualised, but unerotic, culture.